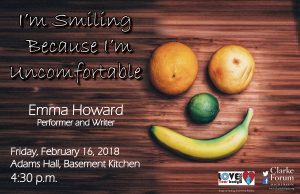 Why do we eat? Why do we stop eating? This one woman show is an autobiographical story traveling from early childhood experiences of queerness and lessons on body image, to a college eating disorder, to the present challenges of eating and living in a human body.

This program is sponsored by the Clarke Forum for Contemporary Issues and is part of Love Your Body Week programming.

Biography (provided by the guest) 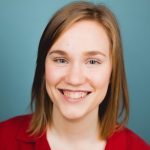 Emma Howard (Performer, Writer) is a recent graduate from the Experimental Theatre Wing at Tisch School of the Arts. Most of her work addresses eating and mental illness. When not writing or performing, she works for a non-profit theatre organization called The Possibility Project. To pay rent, she works at an overpriced vegan fast food restaurant that caters to a lot of men at JP Morgan. She is interested in one day becoming a medical and humanitarian clown and using physical comedy to tackle body image issues. Her favorite food to binge on is peanut butter granola.

Wednesday, October 4, 2017
Rethinking and Remixing the American Dream: Saving Ourselves and Our Sisters from the Margins
Raquel Cepeda, journalist, critic, filmmaker, autobiographer 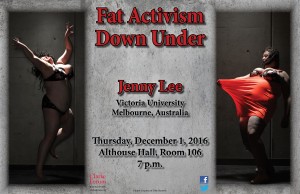 Fat Activism Down Under

This talk explores the fat activist movement in Australia and New Zealand including fat  femme synchronized swim, fat burlesque, and the “plus size” fashion industry.  Lee will discuss the challenges of doing fat activism and scholarship, the complexities of dealing with the media and organizations that discriminate, the personal cost of fat activism, and the white privilege of prominent fat activists. 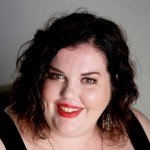 She is a Senior Lecturer in Creative Writing and Literary Studies and has published in academic journals and books, literary journals and magazines. She has presented her research at conferences in Spain, Portugal, Italy, South Africa, New Zealand and Australia, and published work in England, Ireland, the U.S, and Australia. Her academic publications include, ‘Not just a type: diabetes, fat and fear’, in Somatechnics Read more

Native Harvest: The Politics, Health, Culture, and Economics of Food

Future generations rely upon our wisdom and actions today. LaDuke will share stories from her work in local food, energy justice, intergenerational and interspecies equity, and the front lines of food sovereignty. A book sale and signing will follow the presentation. 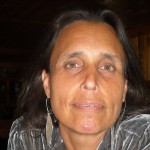 As executive director of the Honor Read more 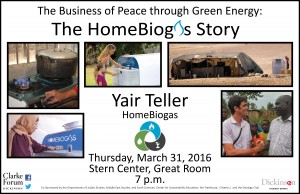 The Business of Peace through Green Energy: The HomeBiogas Story

Teller will discuss how he is using his company, HomeBiogas, as a mechanism for peace building, sustainable development, women’s empowerment, and improvement of the quality of health and life for citizens of developing countries.

Yair Teller is chief scientist and co-founder of the HomeBiogas Company based in Netanya, Israel.  HomeBiogas produces a household renewable energy appliance that recycles kitchen waste into cooking gas and organic fertilizer.  Profits from sales to suburban customers and a successful crowd-funding campaign are used to support donation of HomeBiogas units to economically disadvantaged Bedouin, Palestinian, and Ugandan families for alleviation of poverty.  The work of HomeBiogas has been recognized by the UN and the Peres Center for Peace.

This event is sponsored by the Clarke Forum for Contemporary Issues and Student Senate, and co-sponsored by the departments of Judaic studies, Middle East studies and earth sciences, the Center for Sustainable Education, the Treehouse, J Street U, and the Geology Club.

Yair Teller is a visionary and entrepreneur committed to the cause of sustainability, and driven Read more 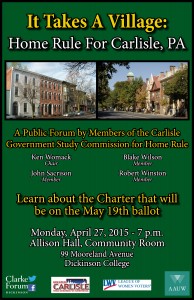 On May 19, 2015, Carlisle residents will face a historic vote:  Whether or not to adopt a Home Rule Charter that will bring significant changes to the structure of our municipal government.  Four members of the Carlisle Government Study Commission, including two Dickinson faculty, will present and answer questions regarding the Home Rule Charter they have spent nearly two years drafting. Copies and summaries of the Charter will be available at the meeting.

The event is sponsored by the Clarke Forum for Contemporary Issues, the Greater Carlisle Area Chamber of Commerce, American Association of University Women (AAUW) Carlisle Branch, and the League of Women Voters Carlisle Area. 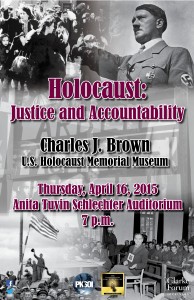 Following World War II, the Nuremburg trials convicted 22 principal Nazi leaders, sentencing 12 to death and seven to various terms in prison. Hundreds of lower-level concentration camp officials were also tried, but the total number convicted and sentenced was relatively small in comparison to the number who implemented the Final Solution, the Nazi term for the Jewish Holocaust. In response to this unprecedented attempt to exterminate an entire group based on racial, ethnic, and religious criteria, the United Nations unanimously adopted the UN Convention on the Prevention and Punishment of the Crime of Genocide on December 9, 1948. The pursuit of Nazi criminals continues to this day even though the passage of time and fading memories make successful prosecutions difficult.

The event is sponsored by the Clarke Forum Contemporary Issues and the  Peacekeeping and Stability Operations Institute (PKSOI) of the U.S. Army War College.

The PKSOI is distributing relevant essays about the Holocaust each week in preparation of this event. Here are links to these essays:
Week One – The Holocaust and Rule Read more 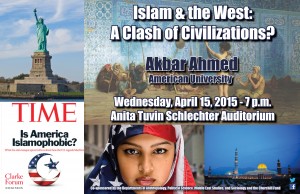 Islam & the West: A Clash of Civilizations?

Ahmed will explore Samuel Huntington’s thesis of a clash of civilizations and challenge it in light of his own research examining relations between the West and the World of Islam after 9/11. 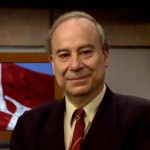 Ambassador Akbar Ahmed is the Ibn Khaldun Chair of Islamic Studies at American University in Washington, D.C. He has served as a nonresident senior fellow at the Brookings Institution and was the first distinguished chair of Middle East and Islamic studies at the U.S Naval Academy in Annapolis, MD. Ahmed belonged to the senior Civil Service of Pakistan and was the Pakistan High Commissioner to the U.K. and Ireland. Previously, Ahmed was the Iqbal Fellow (Chair of Pakistan Studies) and Fellow of Selwyn College at the University of Cambridge. He Read more 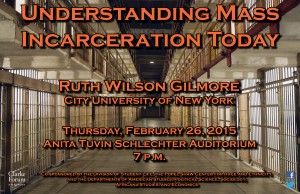 A two year decline in the number of people locked in prisons and jails prompted a so-called “bipartisan consensus” to declare victory in the fight to end mass incarceration. Year 2013 reversed the trend; how, why, and to what end?

This program is sponsored by the Clarke Forum for Contemporary Issues and co-sponsored by the Division of Student Life, the Popel Shaw Center for Race and Ethnicity, and the Departments of American Studies, Political Science, Sociology, Africana Studies, and Economics. 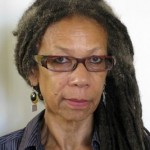 Ruth Wilson Gilmore is professor of earth & environmental sciences, and American studies, and director of the Center for Place, Culture, and Politics, at the Graduate Center of the City University of New York. She received a B.A. and M.F.A. in dramatic literature and criticism from Yale, and a Ph.D. in geography from Rutgers, the State University of New Jersey. She has many publications, invited lectureships, honors, and awards. Her prize-winning book is Golden Gulag: Prisons, Surplus, Crisis, and Opposition in Globalizing California, published in 2007. In a front-page review, the San Francisco Chronicle said “Now, Read more

The Spring 2015 Program Schedule will be Available in mid-January 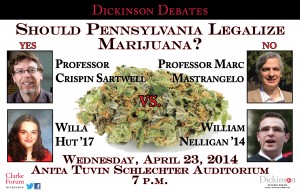 Crispin Sartwell, associate professor of philosophy, and Willa Hut ’17, will argue in favor of the motion, while Marc Mastrangelo, professor of classical studies, and Will Nelligan ’14 will argue in opposition.  The debate will focus in part on the consequences of legalizing marijuana, both positive and negative, as well as how the question relates to the rights and duties of a human being.

This event is the first in a new series titled Dickinson Debates sponsored by the Clarke Forum for Contemporary Issues and the Student Senate Public Affairs Committee.

Marc Mastrangelo is a professor of classical studies and has taught  at Dickinson for 17 years. He has published books and articles on the literature of the later Roman Empire, Greek tragedy, and ancient intellectual history. He is cofounder of the Humanities Collective and faculty advisor to the Quads Neighborhood.

Crispin Sartwell is an associate professor of Read more 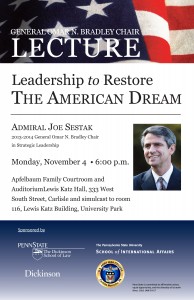 Leadership to Restore the American Dream

“We once had leaders who recognized the expectations of the people, and turned them into demands that advanced the American Dream for both individual opportunity and the common good of the nation. Leadership must once again be accountable for brokering the shared alliance that deepens the individual strengths of these two great values of our American character so that we can restore the dream,” Sestak said.

His presentation will draw on his distinguished 31-year career in the U.S. Navy and his tenure as director for defense policy on the National Security Council, the first director of “Deep Blue,” the U.S. Navy’s counterterrorism unit, a sea-going Commander of an aircraft carrier battle group in war, and a U.S. Congressman representing Pennsylvania’s 7th Congressional District.

Sestak plans to discuss the American Dream, the belief that one’s children will have the opportunity to do even better than their parents. “It was Read more

Jay Michaelson, author of God vs. Gay? The Religious Case for Equality
Topic: Homosexuality versus Religion

Ta-Nehisi Coates, contributing editor, and blogger for The Atlantic
Topic: The U.S. Political Scene and The Emancipation Proclamation 150 Years Later

Additional Information about H. Brian Holland’s Lecture
Shepard Fairey’s HOPE poster remains an iconic image from the 2008 U.S. presidential campaign. By repurposing iconic aesthetic elements of Soviet, Chinese and German propaganda posters, as well as those found in many domestic campaign posters, Fairey sought to create an ironic and idealistic message “designed to capture the optimism and inspiration created by Obama’s candidacy.” For Fairey and others—those interpretive communities sharing similar semiotic regimes—the aesthetic of the poster was interpreted through social conventions of the young, smart, and hip. Within his community, the message was positive and successful.

As various other interpretive communities encountered the posters, however, divergent flows of discourse developed, producing multiple distinct and often contradictory meanings and effects. Two distinct themes were dominant. The first focused on Fairey’s use of propaganda imagery and the underlying fears that Obama’s election would lead to the imposition of an alternate, non-capitalist economic system; the rise of a dominant, totalitarian government that would threaten basic liberties; and the elevation of a leader with cult-like status. The second theme, in some ways related to the first, accused Obama and his supporters of equating him to the messiah or a messiah-like figure.