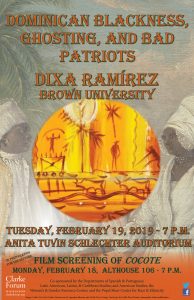 This program is sponsored by the Clarke Forum for Contemporary Issues and co-sponsored by the departments of Spanish & Portuguese; Latin American, Latino & Caribbean studies; American studies; the Women’s & Gender Resource Center and the Popel Shaw Center for Race & Ethnicity. 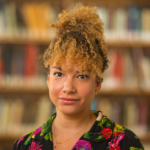 Dixa Ramírez is assistant professor of transnational African American literatures in the American studies and English departments at Brown University. Her first book, Colonial Phantoms: Belonging and Refusal in the Dominican Americas, from the 19th Century to the Present, argues that dominant Western discourses have ghosted the Dominican Republic despite its central place in the architecture of the Americas. Ramírez’s work has been published in Atlantic Studies, Comparative Literature, The Black Scholar, Small Axe, Avidly, and in the Dominican press. Her second book project, Blackness in The Hills: Geographic Isolation and White Supremacy in Dominican and U.S. Nationalist Imaginaries, constructs an aesthetics of the boonies (el monte) at the turn of the twentieth century.