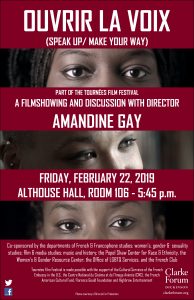 Part of the Tournées Film Festival

Filmmaker Amandine Gay will join us for the showing of Ouvrir la voix (Speak Up/Make Your Way) and for discussion and Q&A. The film is a documentary by and about francophone European black women from the diaspora. Through art, performances, and compelling storytelling, the film focuses on a common experience related to one’s minority status in predominantly white, ex-colonial countries, while highlighting the great diversity of Afropean communities.

Tournées Film Festival is made possible with the support of the Cultural Services of the French Embassy in the U.S., the Centre National du Cinéma et de l’Image Animée (CNC), the French American Cultural Fund, Florence Gould Foundation and Highbrow Entertainment.

The event is sponsored by the Clarke Forum for Contemporary Issues and co-sponsored by the departments of French & Francophone studies; women’s, gender & sexuality studies; film & media studies; music; history; the Popel Shaw Center for Race & Ethnicity, the Women’s & Gender Resource Center, the Office of LGBTQ Services, and the French Club.

Amandine Gay is a Saint-Denis-based filmmaker, speaker and activist. Following her graduation from the Institute of Political Studies in Lyon with a masters in communication, Amandine joined the Conservatory of Dramatic Art in Paris 16 and began performing in theatre, film and television. Since 2012, Amandine has been working as a screenwriter, making her directorial debut in 2014 with her documentary, Speak Up, a feature-length documentary on European Black francophone women. She is also a contributor to the
information website, Slate.fr. In 2015, Amandine authored the preface of the first French translation of bell hooks’ seminal, Ain’t I A Woman. In 2017 Amandine completed her second master’s degree in sociology, focusing on transracial adoption; that same year, she managed the theatrical release of her documentary, Speak Up, in 4 countries (France, Switzerland, Belgium and Canada). She is regularly called as a speaker on afrofeminism,
intersectionality or transracial adoption at universities (UQAM, UOttawa, University of Lausanne, Université Lumière Lyon 2, ERG Brussels, EHESS Paris, etc.) or events such as the Spur Festival. She is also a writer in several collective works: Black Anthology: Adult Adoptees Claim Their Space; Éloge des mauvaises herbes : ce que nous devons à la ZAD or Décolonisons les Arts ! You can follow her in French and English as @OrpheoNegra.