* The event is postponed due to the college’s response to COVID-19. 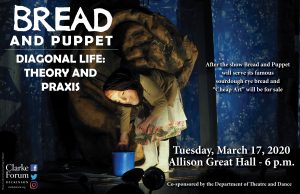 This program is sponsored by the Clarke Forum for Contemporary Issues and the Department of Theatre and Dance. It is also part of the Clarke Forum’s Leadership in an Age of Uncertainty Series. 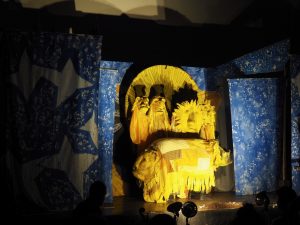 The Bread and Puppet Theater was founded in 1963 by Peter Schumann on New York City’s Lower East Side. Besides rod-puppet and hand puppet shows for children, the concerns of the first productions were rents, rats, police, and other problems of the neighborhood. More complex theater pieces followed, in which sculpture, music, dance and language were equal partners. The puppets grew bigger and bigger. Annual presentations for Christmas, Easter, Thanksgiving and Memorial Day often included children and adults from the community as participants. Many performances were done in the street. During the Vietnam War, Bread and puppet staged block-long processions and pageants involving hundreds of people.

In 1974 Bread and Puppet moved to a farm in Glover in the Northeast Kingdom of Vermont. The 140-year old hay barn was transformed into a museum for veteran puppets. Our Domestic Resurrection Circus, a two day outdoor festival of puppetry shows, was presented annually through 1998.

The company makes its income from touring new and old productions both on the American continent and abroad, and from sales of Bread and Puppet Press’ posters and publications. The traveling puppet shows range from tightly composed theater pieces presented by members of the company to extensive outdoor pageants which require the participation of many volunteers.

Today, Bread and Puppet continues to be one of the oldest, nonprofit, self-supporting theatrical companies in the country.