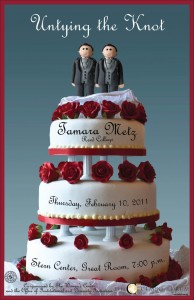 As the issue of same-sex marriage wends its way to the Supreme Court, Metz claims that state control of marriage conflicts with basic liberal principles and threatens families. Drawing a parallel to religion, Metz argues that marriage should be disestablished and that the state should use other means for supporting intimate caregiving.

The event is co-sponsored by The Women’s Center and the Office of Institutional and Diversity Initiatives.

Tamara Metz is a political theorist at Reed College, Portland, OR. Her interests include history of political thought, classical and contemporary liberalism; feminist and critical theory; care; policy, law and ethics. She is the author of Untying the Knot: Marriage, the State and the Case for their Divorce (Princeton University Press, 2010), in which she explores the history of the relationship between marriage and the state in liberal theory and practices, and concludes that marriage should be disestablished. Related material appears in Just Marriage (Oxford, 2004), Contemporary Political Theory (2007), Marriage and Family (Columbia, 2009), and Politics & Gender (2010). At Reed, in addition to courses in political theory, she teaches in the Humanities program.