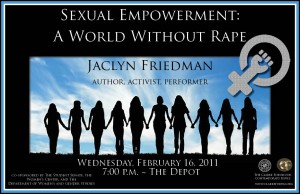 Sexual Empowerment: A World Without Rape

Based on her hit book Yes Means Yes: Visions of Female Sexual Power and a World without Rape, Friedman explains how the culture shames women for expressing their sexuality, how the media uses empty images of female sexuality to fuel sales, and how rape is allowed to function in society.

The event was organized by The Clarke Forum Student Project Managers and is co-sponsored by Student Senate and the Women’s Center.

Jaclyn Friedman is a writer, performer, and activist, and the editor of the hit book Yes Means Yes: Visions of Female Sexual Power and a World Without Rape (one of Publishers’ Weekly’s Top 100 Books of 2009).

As an undergraduate, Jaclyn thought she was too smart to become a victim of sexual assault – until another student proved her wrong. That experience eventually led her to become a student and instructor of IMPACT safety training. At IMPACT, she helped bring safety skills to the communities which most need them, including gang-involved high school students and women transitioning out of abusive relationships.

Jaclyn has also performed nationally in the Yellow Dress, a one-woman show about dating violence. Through the project, she facilitated frank discussions and trainings about relationship safety with high school and college students, as well as their teachers and counselors, in groups as small as 10 and as large as 400.

Jaclyn’s article “Drinking and Rape: Let’s Wise Up About It,” originally published by Women’s eNews in February 2007, was reprinted in several major online outlets and has become a popular reference for new thinking about preventing rape without shaming or blaming women. The article – and the public response to it – was the inspiration for Yes Means Yes.

Friedman has been a guest on “To The Contrary,” “The Brian Lehrer Show,” and numerous other radio and television shows, and her commentary has appeared in outlets including The Washington Post, The Nation, The American Prospect, Slate’s DoubleX, Bitch Magazine, AlterNet, Feministing.com, and The Huffington Post. She is a SheSource expert and a Progressive Women’s Voices alumna, and was named one of 2009’s Top 40 Progressive Leaders Under 40 by the New Leaders Council. She is a founder and the executive director of Women, Action & the Media, a national organization organizing for gender justice in media. Friedman also holds an MFA in creative writing from Emerson College, and writes a column on pop culture, sexuality and sexual violence for Amplify Your Voice, a site promoting healthy sexuality for young people.