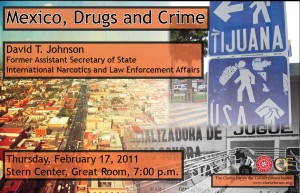 For the last decade, Mexico, and especially its border regions, has suffered skyrocketing murder rates and a breakdown in public safety driven by a surge in drug-fueled organized crime. The “Merida Initiative,” first crafted in 2008, was an attempt by the United States to help its neighbor, but the violence today continues unabated. Johnson, the senior U.S. government official responsible for this “initiative” from its inception until January 2011, will address how it was crafted, what it has delivered, and the prospects for bringing down Mexico’s high rates of murder and violence.

Biography (provided by the speaker)
David T. Johnson served as Assistant Secretary for International Narcotics and Law Enforcement Affairs from October 2007 to January 2011. Prior to his appointment, Mr. Johnson served as Deputy Chief of Mission for the US Embassy in London from August 2003 until August 2007.

Mr. Johnson has also worked in the Department of State on European security issues and as desk officer for Berlin, Austria, and Switzerland; an economic officer at the U.S. Embassy in Berlin; and a vice consul at the U.S. Consulate General in Ciudad Juarez. Before joining the Foreign Service, Mr. Johnson was an Assistant National Trust Examiner with the Treasury Department’s Office of the Comptroller of the Currency.

Mr. Johnson earned a B.A. in economics from Emory University in 1976. He attended Canada’s National Defense College in 1989-1990.