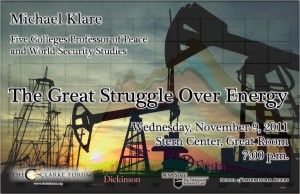 The Great Struggle Over Energy

This lecture will explain how the world’s existing energy system, based on oil and other fossil fuels, will have to be replaced by a new one over the next 30 years or so due to resource scarcity and climate change. But as no known alternative can replace fossil fuels at the present time, there will be an intense struggle over the various contenders for this role – a struggle that will have immense consequences for the major energy firms, the major energy producers and consumers, and all human beings. 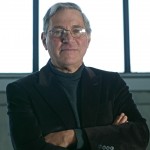 Biography (provided by the speaker)
Michael T. Klare is the Five College Professor of Peace and World Security Studies, a joint appointment at Amherst, Hampshire, Mount Holyoke, and Smith Colleges and the University of Massachusetts at Amherst. Professor Klare has written widely on world security affairs, the arms trade, and global resource politics. His most recent books include Resource Wars (2001), Blood and Oil (2005), and Rising Powers, Shrinking Planet (2008). Dr. Klare has also written for many publications, including Current History, Foreign Affairs, The Nation, Newsweek, and Scientific American. He also serves as defense correspondent of The Nation and is a contributing editor of Current History. In addition to his academic and writing pursuits, Dr. Klare is active in disarmament, environmental, and human rights advocacy work. He serves on the board of the Arms Control Association and the National Priorities Project.