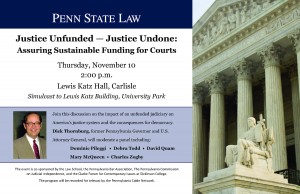 A distinguished list of speakers and panelists will discuss the consequences of an unfunded judiciary on democracy — whether in Pennsylvania or the other 49 states at both the state and federal levels. In addition, the forum will explore how Pennsylvania’s judiciary, as is true in other states, is joining with the other branches to be part of the solution, rather than a problem, in addressing the ongoing budget shortfalls.

The event is co-sponsored by the Law School, the Pennsylvania Bar Association, The Pennsylvania Commission on Judicial Independence, and the Clarke Forum for Contemporary Issues at Dickinson College.

The program will be recorded for telecast by the Pennsylvania Cable Network.