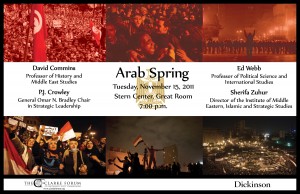 Protest movements continue to spread in the Arab world, taking different shape according to local political structures and social dynamics and posing knotty challenges to U.S. policymakers to keep up with the breakneck speed of developments.

Biographies
David Commins is a professor of history and the Benjamin Rush Distinguished Chair in Liberal Arts and Sciences at Dickinson College. He teaches courses in the Middle East studies program and the history department. His publications include Islamic Reform: Politics and Social Change in Late Ottoman Syria (Oxford University Press, 1990), Historical Dictionary of Syria (Scarecrow Press, 1995, revised edition 2004), and The Wahhabi Mission and Saudi Arabia (IB Tauris, 2006).

President Barack Obama nominated Crowley to be assistant secretary of state for public affairs in 2009. Crowley had served as senior director of public affairs for the National Security Council during the Clinton Administration. He was a 26-year veteran of the United States Air Force and served in Turkey, Germany, and at the U.S. Air Force Academy. During the Kosovo conflict, he worked under Javier Solana, secretary general of NATO, helping to develop a strategic communication capability to build public support for the NATO campaign. He retired from the Air Force in 1999 as a colonel.

Ed Webb is assistant professor of Political Science and International Studies. He also contributes to Middle East Studies and Security Studies. Formerly a member of Britain’s Diplomatic Service, including serving at the British Embassy in Cairo in the 1990′s, he has a B.A. from Cambridge University and Ph.D. from the University of Pennsylvania. His teaching and research interests in the Middle East include secularism, education, authoritarianism, and media, including digital and social media. He is a member of the National Advisory Board of the National Institute for Technology in Liberal Education.

Sherifa Zuhur is the director of the Institute of Middle Eastern, Islamic and Strategic Studies. She was research professor of Islamic and Regional Studies at the Strategic Studies Institute of the U.S. Army War College from 2004-2009. She has held faculty and research positions at MIT, the University of California, Berkeley, the American University in Cairo,UCLA, and Cleveland State University and was President of the Association of Middle East Women¹s Studies. She has published seventeen books and monographs, and more than one hundred and fifty articles or chapters in edited books, most recently Saudi Arabia (ABC-Clio) scheduled for early fall 2011 publication.