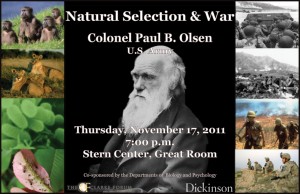 Today’s advances in evolutionary biology are unifying competing theories of natural selection and serve as a timely call for a similar unification of competing theories of war. This lecture explores the relationship between war and natural selection by first examining war’s biological origins, and then placing them within a multidisciplinary framework called the Nature of War Theory.

This theory, as its name implies, reconciles natural selection and war to reveal a shared overarching and paradoxical duality, displaying that war is characterized by the simultaneous violent interplay of evolutionary individual-level and group-level adaptations, manifested by individualist and altruistic wars, respectively, and highlighted by trends and insights recognizable to both students of war and evolutionary biology.

This event is sponsored by The Clarke Forum for Contemporary Issues and co-sponsored by the Departments of Biology and Psychology. 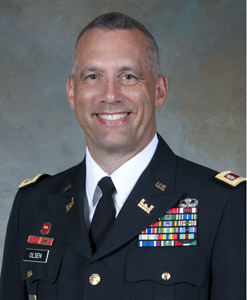 Biography (provided by the speaker)
Colonel Olsen was commissioned in the U.S. Army Corps of Engineers upon graduation from the University of Wisconsin where he earned a Bachelor of Science degree in Geography. He has held leadership positions in Army engineer units in Europe, the Middle East, Africa, and the United States, including command of the 249th Engineer Battalion (Prime Power) during Operation Iraqi Freedom in Iraq. Additionally, he has held a number of key staff assignments including the Speechwriter to General David Petraeus and the Executive Officer to Janet Menig, the Army’s Deputy Assistant Chief of Staff for Installation Management.

Colonel Olsen holds a Master of Science Degree in Civil and Infrastructure Engineering from George Mason University, a Master of Strategic Studies from the U.S. Army War College, and a Master of Arts Degree in Business Management from Webster University. He is also a registered Professional Engineer in the Commonwealth of Virginia. His military education includes completion of the Engineer Officer Basic and Advanced Courses, the U.S. Army Command and General Staff College and the U.S. Army War College where graduated with honors. He is also a graduate of the French Army Engineer Advanced Course.

Awards and decorations earned by Colonel Olsen include the Bronze Star Medal and the Meritorious Service Medal with four Oak Leaf Clusters. Additionally, he was the 2003 recipient of the Secretary of the Army’s Frank Pace Award for innovation and the 2011 recipient of the Commandant’s Award for Distinction in Research at the U.S. Army War College.

He is married to Lieutenant Colonel Cynthia Olsen, Judge Advocate General’s Corps. They have three children: David, Gabriel, and Rebecca.