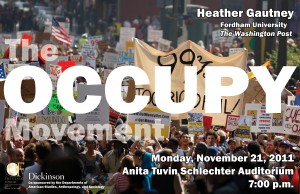 The event is sponsored by The Clarke Forum for Contemporary Issues and the Departments of Anthropology, American Studies, Sociology and Economics.

On September 17th of this year, a relatively small group of protesters calling themselves “Occupy Wall Street” squatted a small park in Manhattan’s financial district to protest the role of Wall Street institutions in precipitating economic recession and alarming increases in social inequality. Within weeks, the movement has grown into a national phenomenon, spurring “Occupy” communities in nearly every major U.S. city, and entering issues of corruption and social welfare into mainstream political discourse.

Occupy Wall Street describes itself as a leaderless, post-political movement of the 99 Percent. The movement consists of local Occupys that operate as a kind of network: they organize rallies, demonstrations, and squatter communities in their immediate locales, but remain linked through a common antipathy to corporate power and interest in addressing issues of social inequality in a radically democratic way. Each Occupy employs a local decision-making body, or General Assembly, that operates by way of a unique consensus process, but the movement as a whole has refused to issue specific demands or organize around a common political agenda for fear of diluting its message and becoming exclusionary.

While public opinion appears to favor the Occupy movement as a whole, responses from local officials and police and have varied significantly, from open cooperation to the use of force. Reaction at the highest levels of government has also been mixed. Democrats have tended to view to the movement favorably, while Republicans deride it as unfocused and unpatriotic. As comparisons to the Tea Party abound, many wonder if the movement will affect the 2012 elections in a meaningful way.

This lecture will discuss the roots of the Occupy movement, its initial rumblings in New York, and how it emerged and proliferated over the past two months. It will analyze the significance of its leaderless, post-political, “99 Percent” identity, and discuss what it actually means “to Occupy.” Finally, it will consider the potential impact of the movement on the upcoming elections, as well as its broader significance for egalitarian social change. 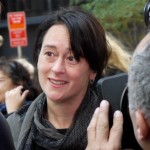 Biography (provided by the speaker)
Heather Gautney is an assistant professor of sociology at Fordham University, Lincoln Center. She has been active in and written books and articles about a variety of contemporary social movements, including Occupy Wall Street, the Alternative Globalization Movement, the Anti-Iraq War Movement, the anti-militarism movement in Vieques, the Disobbedienti in Italy, and the World Social Forum.

She is author of Protest and Organization in the Alternative Globalization Era (Palgrave) and co-editor of Democracy, States and the Struggle for Global Justice (Routledge), and Implicating Empire (Basic Books). She is currently working on a second edition of Protest and Organization with a chapter on the Occupy Wall Street movement and has written OpEd pieces for the Washington Post on the leaderless and democratic aspects of the movement as well as the response from local officials and law enforcement.

Current research, funded by the American Sociological Association, focuses on economic trends in the film industry and their implications for the future of labor market regulation and trade unionism in entertainment and other sectors, with a focus on its implications for theories of flexible specialization.

She is a member of the Social Text editorial collective and the advisory board of the Center for Place, Culture and Politics.