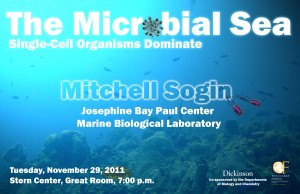 The Census of Marine Microbes, a collaboration between 50 research laboratories working in study sites distributed throughout the world’s oceans, has revealed spectacular levels of single cell microbial diversity, including some very uncommon groups of microbes that constitute the “rare biosphere”. 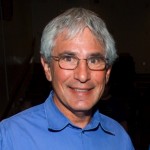 Biography (provided by the speaker)
Dr. Sogin received his B.S. in Chemistry and Microbiology from the University of Illinois in 1967 and a Ph.D. in Microbiology and Molecular Biology in 1972 with Carl Woese. He joined Norman Pace’s group to work on rRNA processing at the National Jewish Center in Denver, Colorado. In 1976 he joined the faculty of National Jewish Hospital and attained the rank of Associate Professor in the Microbiology Department of the University of Colorado Health Sciences Center. Dr. Sogin was also a Miller Professor at the University of California at Berkeley. He moved to the Marine Biological Laboratory in 1989 after establishing the summer Workshop in Molecular Evolution. His laboratory founded the Josephine Bay Paul Center for Comparative Molecular Biology and Evolution in 1996. Over its short history, the Bay Paul Center has become a focal point for collaborative research between molecular biologists, biochemists, parasitologists, ecologists, and other colleagues from the MBL’s summer and resident communities, and from around the world.

Dr. Sogin has spent much of his career using molecular phylogeny to determine evolutionary relationships among eukaryotic microbes and to explore natural microbial eukaryotes in the environment. His work laid the foundation for understanding the eukaryotic molecular tree of life at the deepest levels. More recently his attention has switched to use of massively parallel sequencing technology to explore the diversity and relative abundance of different kinds of microorganisms in marine and terrestrial environments as well as the microbiomes of mammalian organisms. His research group discovered that microbial diversity in the oceans is orders of magnitude greater than previously reported. Low abundance organisms account for most of the observed phylogenettic diversity. This “rare biosphere” is very ancient and may represent a nearly inexhaustible source of genomic innovation.