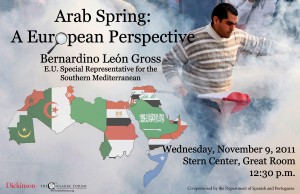 Protest movements and uprisings continue to spread in the Arab world, taking different shape according to local political structures and social dynamics. The trend poses knotty challenges to European Union policy makers as they try to keep up with the breakneck speed of developments.

This event is sponsored by The Clarke Forum for Contemporary Issues and the Department of Spanish and Portuguese.

Biography (provided by the speaker)
Bernardino Leon is the European Union Special Representative (EUSR) for the Southern Mediterranean.

He was born in Malaga, where he obtained a degree in Law focusing his studies in public international law. He got a diploma in international studies from the CEI, University of Barcelona. He became a Spanish diplomat in 1989. He was first posted to Liberia in 1990-1991, where the devastating civil war focused his professional interest in understanding the underpinning causes of ethnic violence.

Since then, his political and diplomatic career has been mainly devoted to the Arab world. In 1991, he was part of a short mission to Libya in the context of establishing the international embargo against that country. From 1992-1995, he was posted to Algeria where he lived the process after the elections, de coup d’etat and the subsequent violence. He was then posted to Greece, where he followed the end of the conflict in Bosnia and the Balkans region and the negotiations and implementation of the Dayton Agreement. During this period he traveled frequently to Turkey and followed its political and social evolution very closely.
In 1998, at the outset of the CFSP, he became personal adviser to the EU Special Representative for the Middle East Peace Process, Miguel Angel Moratinos, at the time when the Wye Accords were being negotiated. He remained until 2001, during the Taba Accords negotiations (which were contained in the “Morations Document”) and the set up of the Quartet on the Middle East. His mission was primarily focused in Egypt, Jordan, Lebanon, Syria, Israel and Palestine.

In 2001, he became head of the Three Cultures of the Mediterranean Foundation, which is a Moroccan-Spanish institution for dialogue and mutual understanding among the different cultures and religions in the Mediterranean. During this period, he worked very closely with governments and civil society representatives. That was the case of Tunisia, for instance, where he worked with members of the opposition.
In 2003, Edward Said, Daniel Barenboim and Bernardino Leon, founded the Barenboim-Said Foundation, which focused on the West Eastern Divan orchestra for young musicians from the Arab countries of the Middle East and Israel.

From 2004-2008, he became secretary of state for foreign affairs at the Spanish Ministry of Foreign Affairs and Cooperation. He is particularly proud of having helped launch the Alliance of Civilisations, which is an initiative proposed by PM of Spain, José Luis Rodríguez Zapatero, at the 59th General Assembly of the United Nations (UN) in 2005. It was co-sponsored by the Turkish Prime Minister, Recep Tayyip Erdoğan. The initiative seeks to galvanize international action against extremism through the forging of international, intercultural and interreligious dialogue and cooperation. The Alliance places a particular emphasis on defusing tensions between the Western and Islamic worlds. During this period, he worked very closely with Arab countries and was particularly involved in the negotiations between Cyprus and Turkey.

In 2008 he was appointed secretary general at the Spanish Prime Minister’s Office, which involves, among other responsibilities, the role as the main foreign policy advisor to the Prime Minister of Spain.

In 2009 he was appointed, keeping his post as Secretary General of the Presidency, Sherpa for the G20, a forum in which he participated in all the negotiations and summits to date, which has involved holding a very active role in major international economic and financial issues.

He has published and translated several books and articles on the Arab Muslim world and its relationship with the West, and has given numerous lectures on these issues. He maintained a close relationship with the great intellectual and fighter for democracy in the Arab world Edward Said. His son, Wadie, wrote in the Spanish edition of the book Covering Islam, “My father’s memory is honoured in the introduction to this Spanish edition written by Bernardino León. Although many politicians sought the advice of my father throughout his life, almost always were too shy to take heed of it despite agreeing with the analysis. Bernardino León is one of those rare politicians who have recognized the impact of my father’s work both in word and deed, and has never suffered from the weakness that affects other politicians.”