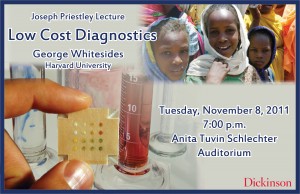 * Professor Whitesides will sign copies of his book
No Small Matter: Science on the Nanoscale
Monday, November 7 at 4:00 p.m. in the Waidner-Spahr Library’s Biblio Café.

stry, applied enzymology, self-assembly, soft lithography, microfluidics, organic surface science, and nanotechnology. His current research interests include physical and organic chemistry, materials science, biophysics, complexity and simplicity, tools for biology, technology for developing economies, and the origin of life. His laboratory at Harvard University is noted for its diversity, creativity, and productivity, and for the quality of the students it produces.

He received an A.B. degree from Harvard University and a Ph.D. from the California Institute of Technology under John D. Roberts. He was a member of the faculty of the Massachusetts Institute of Technology from 1963 to 1982. He joined the Department of Chemistry at Harvard in 1982 and served as department chairman from 1986 to 1989. From 1982 to 2004, Whitesides was the Mallinckrodt Professor of Chemistry at Harvard and is currently the Woodford L. and Ann A. Flowers University Professor.

Whitesides is active in numerous public service roles. He has served on advisory committees for the National Science Foundation, NASA, the U.S. Department of Defense. He has also served on the National Research Council in various capacities since 1984, including roles with the Committee on Science and Technology for Counterterrorism, Science Technology and Economic Policy, the “Gathering Storm” Committee, and the Committee on Science, Engineering, and Public Policy. Whitesides is the author of over 1,100 scientific articles and is listed as an inventor on more than 100 patents.