The Challenges of China 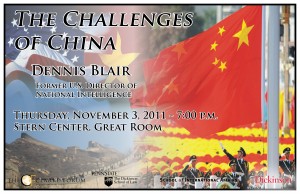 * This event is part of The Clarke Forum’s series on Leadership in an Age
of Uncertainty.

Lecture Description (provided by the speaker)
To outsiders, China seems to be on a roll these days. The 2008 Olympics were an impressive coming-out party; it weathered the 2007-2008 world economic crisis better than most other countries, and has resumed double-digit economic growth; it has shown the world an advanced stealth aircraft, is about to launch an aircraft carrier, and has sent ships to join the international anti-piracy patrol in the Indian Ocean. Yet in many ways China does not act like a powerful, confident country. It squabbles with its neighbors to the East and South; it is in the midst of a mostly secret succession process; Chinese search engines will not accept “jasmine”; labor unrest and inflation are growing. Admiral Blair will describe China’s prospects for development in the future – economic, political, social and military – and will discuss the implications for the United States, and American policies and actions to deal with China.

Biography (provided by the speaker)
Admiral Blair served as director of National Intelligence from January 2009 to May 2010. He led sixteen national intelligence agencies, administering a budget of $50 billion and providing integrated intelligence support to the President, Congress and operations in the field. Prior to rejoining the government, he held the John M. Shalikashvili Chair in National Security Studies with the National Bureau of Asian Research.

From 2003 to 2006, Admiral Blair was president and chief executive officer of the Institute for Defense Analyses (IDA), a federally funded research and development center based in Alexandria, Virginia that supports the Department of Defense, the Department of Homeland Security and the Intelligence Community.

Prior to retiring from the Navy in 2002, Admiral Blair served as commander in chief, U.S. Pacific Command, the largest of the combatant commands. During his 34-year Navy career, Admiral Blair served on guided missile destroyers in both the Atlantic and Pacific fleets and commanded the Kitty Hawk Battle Group. Ashore, he served as Director of the Joint Staff and held budget and policy positions on the National Security Council and several major Navy staffs.

Admiral Blair currently is a member of the Energy Security Leadership Council of Securing America’s Future Energy. In the past he has served as a director of Tyco International, EDO Corporation, Iridium, LLC, and as a director of several non-profit organizations.

A graduate of the U.S. Naval Academy, Admiral Blair earned a master’s degree in history and languages from Oxford University as a Rhodes scholar, and was a White House fellow at the Department of Housing and Urban Development. He has been awarded four Defense Distinguished Service medals, three National Intelligence Distinguished Service medals, and has received decorations from the governments of Japan, Thailand, Korea, Australia, the Philippines and Taiwan.