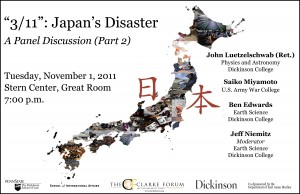 During the fall 2011 semester, the Clarke Forum will sponsor two panel discussions on Japan’s “3/11” that will examine the powerful Tohoku earthquake, the ensuing tsunami, and the ongoing nuclear situation. This panel will examine the disasters from a scientific perspective.

This event is jointly sponsored by The Clarke Forum for Contemporary Issues and Penn State University Dickinson School of Law and School of International Affairs and co-sponsored by the Department of East Asian Studies.

Biographies of the Panelists

Saiko Miyamoto is a student at the U.S. Army War College.  She holds a bachelor of arts degree in English literature from Meiji Gakuin University, Tokyo; a master of arts degree in translation and interpretation for Japanese and English from Monterey Institute of International Studies, Monterey, CA; and a master of business administration from University of Maryland University College, Adelphi, MD.  Most recently, she was the assistant deputy chief of staff for Host Nation Acitivies (G5), U.S. Army, Japan, at Camp Zama. She provided recommendations to the Command Group on host nation (Japan) and regional political military affairs, events, trends, and developments that would have potential impact on U.S. Military in Japan, bilateral relations between the United States and Japan as well as relevant security arrangements.

Prof. Edwards is an associate professor of earth sciences s at Dickinson College. His research foci are glaciovolcanism (interactions between volcanoes and ice, including the formation of pillow lava and cooling joints), petrological imaging of lithospheric stratigraphy (using xenoliths from Neogene to Recent volcanoes in the North American Cordillera), and applications of theoretical models for understanding the transport and crystallization of silicate melts. His other interests include mineralogy, environmental hazards, the history of science, and the influence of plate tectonics on almost everything. His current research involves taking students to places like Monterrat (West Indies) to study xenoliths and volcanic stratigraphy, Iceland to study volcano-ice interactions, and northern British Columbia to map and collect samples of volcanic deposits, especially from volcanoes that erupted beneath or against ice. Edwards received his B.A. from Carleton College in 1989, a M.S. at the University of Wyoming in 1993 and his Ph.D. at the University of British Columbia in 1997.

Prof. Luetzelschwab  joined the Dickinson College faculty in 1968 as a member of the Department of Physics and Astronomy where he taught a variety of physics courses until his retirement in 2003. He is a certified Health Physicist and has published papers on radioactivity and radiation and developed a Health Physics program in the Department of Physics. He has served on several national Health Physics Society committees as well as president of two local Health Physics chapters.  He received his A.B. degree from Earlham College in 1962, with majors in Physics and Mathematics, and received a Ph.D. degree from Washington University in Nuclear Physics in 1968.

Prof. Niemitz is a professor of earth sciences at Dickinson College.  His specialties are low-temperature geochemistry, hydrogeology, and paleoclimatology. His current research involves quality and quantity of groundwater resources on carbonate islands in the Bahamas, the effect of release of sediment and their included pollutants from 18th and 19th century mill dams in PA, and geochemical indicators of paleoclimate in ancient lake sediments in the eastern United States.  He received his B.A. degree from Williams College in 1972 and his Ph.D. from the  University of Southern California in 1977.