Crowley will explore the impact that Wikileaks has had on global politics and the media as well as the implications it has had for relevant national security policies.

This event is jointly sponsored by The Clarke Forum for Contemporary Issues, Penn State University Dickinson School of Law and School of International Affairs, and the U.S. Army War College. 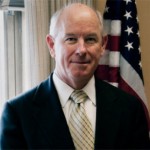 President Barack Obama nominated Crowley to be assistant secretary of state for public affairs in the U.S. Department of State in 2009. Previously, he served as special assistant to the president for national security affairs and senior director of public affairs for the National Security Council during the Clinton Administration. Across a 30-year government career, Crowley was a 26-year veteran of the United States Air Force and served in Turkey, Germany, and at the United States Air Force Academy. During the Kosovo conflict, he worked under Javier Solana, Secretary General of NATO, helping to develop a strategic communication capability to keep American and European publics informed about military operations, but also counteract deliberate efforts by the Serbian government to use state-controlled media coverage to undercut public support for the NATO campaign. He retired from the Air Force in 1999 as a colonel.

Prior to joining the Department of State, Crowley was a senior fellow with the Center for American Progress, with a particular policy focus on homeland security and combating terrorism in ways that are consistent with the rule of law, and can sustain long-term public support.

The Omar Bradley Chair is a joint initiative among the United States Army War College, Dickinson College and Penn State University Dickinson School of Law and School of International Affairs. Its objective is to advance the study of strategic leadership and enhance civilian-military dialogue by offering distinguished individuals the opportunity to contribute to the educational and research activities of the partner institutions. Previous chair-holders include former director of national intelligence and retired United States Navy four-star Admiral Dennis Blair and Pulitzer Prize-winning historian and journalist Rick Atkinson.