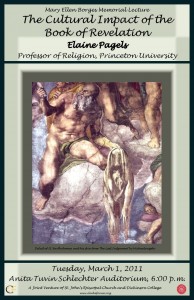 The Cultural Impact of the Book of Revelation

Pagels will address who wrote the Book of Revelation, why it was written, how it became a part of the Bible, and how it became influential in politics, art and culture over the last 2,000 years.

Biography (from Princeton.edu)
Elaine Pagels joined the Princeton faculty in 1982, shortly after receiving a MacArthur Fellowship. Perhaps best known as the author of The Gnostic Gospels, The Origin of Satan, and Adam, Eve and the Serpent, she has published widely on Gnosticism and early Christianity, and continues to pursue research interests in late antiquity. Her most recent books include Beyond Belief: The Secret Gospel of Thomas (was on the New York Times best-seller list) and Reading Judas: The Gospel of Judas and the Shaping of Christianity, co-authored with Karen King of Harvard.  Her current project is working on a book entitled Revelations which will explore the New Testament Book of Revelation and other Jewish, Christian, and Pagan books of Revelation written around the same time.  She will be on leave for the 2010-11 academic year and has been awarded an Old Dominion Professorship.