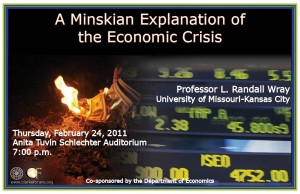 A Minskian Explanation of the Economic Crisis

Relying upon the theories and assumptions of Hyman Minsky, Wray will explore and expound upon the factors that contributed to the current economic and financial crisis.

This event is co-sponsored by the Department of Economics.

Biography (provided by the speaker)
L. Randall Wray is a professor of economics at the University of Missouri-Kansas City as well as research director, the Center for Full Employment and Price Stability, and senior scholar at the Levy Economics Institute of Bard College, NY. A student of Hyman P. Minsky while at Washington University in St. Louis, Wray has focused on monetary theory and policy, macroeconomics, financial instability, and employment policy. He has published widely in journals and is the author of Understanding Modern Money: The Key to Full Employment and Price Stability (Elgar, 1998) and Money and Credit in Capitalist Economies (Elgar 1990). He is the editor of Credit and State Theories of Money (Edward Elgar 2004) and the co-editor of Contemporary Post Keynesian Analysis (Edward Elgar 2005), Money, Financial Instability and Stabilization Policy (Edward Elgar 2006), and Keynes for the Twenty-First Century: The Continuing Relevance of The General Theory, Palgrave, 2008. Wray is also the author of numerous scholarly articles in edited books and academic journals, including the Journal of Economic Issues, Cambridge Journal of Economics, Review of Political Economy, Journal of Post Keynesian Economics, Economic and Labour Relations Review, Economie Appliquée, and the Eastern Economic Journal. Wray received a B.A. from the University of the Pacific and an M.A. and Ph.D. from Washington University in St. Louis. He has served as a visiting professor at the University of Rome, the University of Paris, and UNAM (Mexico City). He was the Bernardin-Haskell Professor, UMKC, Fall 1996, and joined the UMKC faculty as professor of economics, August 1999.