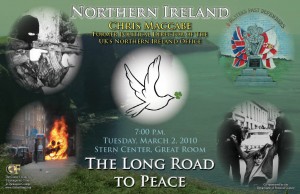 In 2007, two groups that had hated each other for decades joined together to form a new government for Northern Ireland. Chris Maccabe, former political director of the British government’s Northern Ireland Office, was at the center of the negotiations that brought to an end forty years of sectarian murder and paramilitary terrorism (the “Troubles”) in an area sharply divided by religion, class, and nationalism.

Topical Background
In 1920, near the end of the Irish War of Independence, the British parliament divided the Irish isle in two, establishing a home rule government in each part. The six northeastern counties of the isle became Northern Ireland; the southern twenty-six counties eventually became the independent Republic of Ireland. Northern Ireland remains within the United Kingdom (UK) today.

Since this division of the Irish isle, Irish nationalists, organized in a political party, Sinn Féin, and a paramilitary organization, the Irish Republican Army (IRA), have fought for uniting Ireland into an independent, thirty-two-county Irish republic. The unionists of Northern Ireland, organized in political parties, such as the Ulster Unionist Party and the Democratic Unionist Party, and in paramilitary organizations, such as the Ulster Volunteer Force, wish to keep the six northeastern counties within the UK. A central issue to this conflict is the religious divide between the Catholics, a majority of whom desire independence, and the Protestants, a majority of whom support the unionist cause. The Catholics, a minority within Northern Ireland, have had limited access to political power.

Unionist and republican paramilitary organizations violently confronted each other a number of times since the partition of Ireland, leading to the designation of the period from the 1960s to the 1990s as “the Troubles.” Throughout “the Troubles,” British and Irish ministries and organizations sought to bring all parties together to negotiate and further the peace process. These negotiations led to the Good Friday agreement in 1998 and the establishment of a devolved legislature, the Northern Ireland Assembly at Stormont, in 2007. While relations between the unionist parties and Sinn Féin have improved greatly, there continues to be disagreements over political and military power.

About the Speaker
Chris Maccabe retired in 2008 after eight-plus years as political director of the United Kingdom’s Northern Ireland Office (NIO) and nearly forty years of government service overall. He joined the NIO’s predecessor organization in 1971 and served various ministers throughout the 1970s before becoming special assistant to the head of the Royal Ulster Constabulary in 1980 and director of the Northern Ireland prison service in 1988. In 1992 he returned to the NIO proper as head of political affairs and in that and subsequent positions was intimately involved in the long all-party (and paramilitary) negotiations that led to the Good Friday agreement in 1998 and the creation of the powersharing government it contemplated in 2007. Maccabe has also served as an adviser on peace processes and political development to governments and international organizations in places like Sri Lanka, Kosovo, and Iraq. Queen Elizabeth II appointed him a Companion of the Order of the Bath (CB) in 2004.