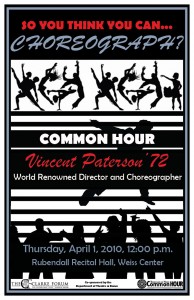 Vincent Paterson is a world-renowned director and choreographer whose career spans just about every genre of the entertainment industry including film, theatre, Broadway, concert tours, opera, music videos, television and commercials.

“What I try to do with my work is to fill the audience with an energy that alters their being in a positive way. The work is the stone thrown into the pond. The ripples emanate from the audience. If the audience is affected even infinitesimally in a positive way, they might make something positive happen in the next five minutes, or tomorrow, or next week. That action will vibrate into the ether and the better the world will be.”

Vincent directed the critically acclaimed opera Manon with soprano Anna Netrebko and conducted by Placido Domingo. His direction of Anna Netrebko: The Woman, The Voice received a nomination for “Best Television Arts Program” at the Montreaux Film Festival. The DVD is the top selling classical DVD in European history. Vincent directed and choreographed Berlin’s first original production of the musical Cabaret at Bar Jeder-Vernunft, a mirror-tent from 1914. Vincent’s direction of the play Gangsta Love, set in a boxing club, earned him a Los Angeles Drama-Logue award for Outstanding Director. He directed Prague’s National BlackLight Theater in Gulliver’s Travels.

Sponsored by The Clarke Forum for Contemporary Issues and the Department of Theatre and Dance.