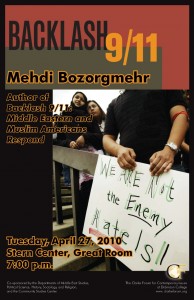 For most Americans, September 11, 2001 symbolizes the moment when their security was altered. For Middle Eastern and Muslim Americans, 9/11 also ushered in a backlash in the form of hate crimes, discrimination, and a string of devastating government initiatives. From the viewpoint of the targeted populations, the backlash spoke louder than official proclamations to the contrary. Instead of capitulating, however, organizations representing Middle Eastern and Muslim Americans mobilized to demonstrate their commitment to the United States while defending their rights. They distanced themselves from terrorists and condemned their actions; educated the public about the Middle East and the Muslim faith; and actively involved their constituents in voter-registration, know-your-rights forums, and civic and political integration activities.

This study provides the first comprehensive analysis of the impact of the post-9/11 events on Middle Eastern and Muslim Americans as well as their organized response for inclusion in America’s social, religious and political mosaic. Through fieldwork and interviews with leaders of community-based organizations across the country, the authors have researched the unfolding of this process since its inception. Backlash 9/11 introduces a new theoretical model of backlash and mobilization during times of crisis.

This event is co-sponsored by the Departments of Political Science, History, Middle East Studies, Religion, Sociology and the Community Studies Center.

About the Speaker
Mehdi Bozorgmehr is associate professor of sociology and founding co-director of the Middle East and Middle Eastern American Center (MEMEAC) at the Graduate Center, City University of New York. He is the co-author of Backlash 9/11: Middle Eastern and Muslim Americans Respond (University of California Press, 2009) with Anny Bakalian, and the co-editor of the award-winning Ethnic Los Angeles (Russell Sage, 1996) with Roger Waldinger. He presented key findings of this book at an international conference on citizenship and identity at Dickinson College in 1998. He has also published over 50 articles, book chapters and encyclopedia entries. Grants from the National Science, Russell Sage, Mellon, and Sloan foundations have supported his research projects, and from the Ford Foundation and the U.S. Department of Education his administrative and programmatic initiatives.