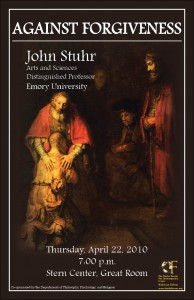 Drawing on philosophy, religion, psychology, medicine, political theory, and law, this lecture begins with the explosion of contemporary popular and scholarly concern with forgiveness in both personal and social settings. It analyzes the behavioral and affective nature of forgiveness and charts recent changes in our understanding of forgiveness from the largely theological and ethical to the primarily psychological and medical. These consequences, and the serious practical problems they involve, are considered in the context of atrocities often characterized as unforgivable. The lecture concludes by raising critical questions about the consequences of this change for justice and for hope in the face of atrocities, and for our understanding of ourselves. Through this criticism, the lecture points at an ethics and politics that would be beyond forgiveness.

This event is co-sponsored by the Departments of Philosophy, Psychology and Religion.

About the Speaker
John J. Stuhr is the Arts and Sciences Distinguished Professor of Philosophy and American Studies and Chair of the Department of Philosophy at Emory University. He received his B.A. from Carleton College—a very selective liberal arts college like Dickinson–, and his M.A. and Ph.D. in philosophy from Vanderbilt University. His main teaching and research interests are in ethics, social and political philosophy, 19th and 20th century American and European philosophy, and contemporary cultural criticism. Prior to arriving at Emory last year, he taught at Vanderbilt University, Penn State University, the University of Oregon (where he was the founding director of the humanities center), and Whitman College—another Dickinson-like school. In addition, he has held visiting faculty positions in Germany, Australia, France, and Russia, and he’s worked on national and international political projects and was an editorial writer for a major newspaper. His most recent books are 100 Years of Pragmatism: William James’s Revolutionary Philosophy and Pragmatism, Postmodernism, and the Future of Philosophy. He is now completing a book on forgiveness and another on democracy and pluralism. He is the director of the American Philosophies Forum, a past president of the Society for the Advancement of American Philosophy, managing co-editor of The Journal of Speculative Philosophy, and series editor of American Philosophy (Indiana University Press) and series co-editor of American and European Philosophy (Penn State University Press). More important to him, however, are the several undergraduate teaching awards and prizes he has received.