Running from the Washingtons: Ona Judge and The Founding of a Nation

When George Washington was elected president, he reluctantly left behind his beloved Mount Vernon to serve in Philadelphia, the temporary seat of the nation’s capital. In setting up his household he brought along nine slaves, including Ona Judge. As the president grew accustomed to Northern ways, there was one change he couldn’t abide: Pennsylvania law required enslaved people be set free after six months of residency in the state. Rather than comply, Washington decided to circumvent the law. Every six months he sent the slaves back down south just as the clock was about to expire.

Though Ona Judge lived a life of relative comfort, she was denied freedom. So, when the opportunity presented itself one clear and pleasant spring day in Philadelphia, Judge left everything she knew to escape to New England. Yet freedom would not come without its costs. At just twenty-two-years-old, Judge became the subject of an intense manhunt led by George Washington, who used his political and personal contacts to recapture his property.

This event is sponsored by the Clarke Forum for Contemporary Issues and co-sponsored by the Office of the President; the Office of Equity & Inclusion; the Division of Student Life; the Popel Shaw Center for Race & Ethnicity; the House Divided Project; the Women’s & Gender Resource Center, the Department of Africana Studies; and Department of Women’s, Gender & Sexuality Studies; and the Law & Policy Program. 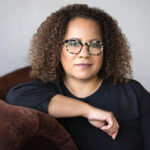 Erica Armstrong Dunbar is the Charles and Mary Beard Distinguished Professor of History at Rutgers University. She currently serves as the national director of the Association of Black Women Historians –the only professional organization focused on Black women’s history. Dunbar’s first book, A Fragile Freedom: African American Women and Emancipation in the Antebellum City was published by Yale University in 2008. Her second book, Never Caught: The Washingtons’ Relentless Pursuit of Their Runaway Slave, Ona Judge (Simon & Schuster) was a finalist for the National Book Award in nonfiction and a winner of the 2018 Frederick Douglass Book Prize. The young readers version of Never Caught (Aladdin/Simon and Schuster) was published in January 2019. In the fall of 2019, Dunbar published She Came To Slay: The Life and Times of Harriet Tubman, an accessible biography of one of the most remarkable social activists of the 19th century. Dunbar’s op-eds in outlets such as the New York Times, The Nation, TIME, Essence, and the Philadelphia Inquirer, her commentary in media outlets such as CNN and the LA Times, and her appearances in documentaries such as “The Abolitionists“ an American Experience production on PBS, the History Channel’s biopic of George Washington (Washington), Kareem Abdul Jabbar’s Black Patriots, and Ken Burns’ Benjamin Franklin place her at the center of America’s public history. More recently, Dunbar has expanded her audience by serving as co-executive producer on HBO’s hit television series, “The Gilded Age.”