The Carlisle Project: Artists in Conversation

The Carlisle Project, written by Ronee Penoi (music/lyrics) and Annalisa Dias (lyrics), unravels the complicated legacy and trauma of Indian boarding schools in an expressive song cycle. The project uses song, satire, and ceremony to tell the harrowing history of the Carlisle Indian School and the brutal assimilation enforced under its motto “Kill the Indian, Save the Man.” In this musical song cycle, Indigenous descendants separated by time, place, and experience grapple with the generational trauma and erasure that Carlisle caused and explore what it means to be Native American now.

In their lecture, Penoi and Dias discuss how The Carlisle Project is an act of decolonization and a restorying of our past, while offering a view of an Indigenous future. 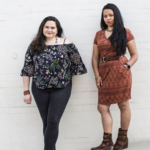 Ronee Penoi (Laguna Pueblo/Cherokee) is a composer, arts presenter, facilitator and activist. Penoi is currently director of artistic programming at ArtsEmerson, Boston’s leading presenter of contemporary world theater. Prior to that appointment, she was a producer at Octopus Theatricals, advancing the work of many outstanding artists from development, to production, to touring in the US and internationally. These artists and projects include Byron Au Yong  and Aaron Jafferis (Activist Songbook), DeLanna Studi (And So We Walked), Phantom Limb Company (Falling Out), Ripe Time (Haruki Murakami’s Sleep), Homer’s Coat (An Iliad by Denis O’Hare and Lisa Peterson), Christine Jones’ Theatre for One, Poland’s Song of the Goat Theatre, and many more. Other prior roles include NNPN producer-in-residence at Woolly Mammoth Theatre Company, senior new play producing fellow and directing Fellow at Arena Stage, and ASM for the national tour of Anna Deavere Smith’s Let Me Down Easy. Penoi is a two-time ISPA (International Society for Performing Arts) global fellow, a two-time recipient of the DC Commission on the Arts and Humanities Fellowship for her composing work, and has been an APAP (Association of Performing Arts Professionals) Leadership Fellow and TCG (Theatre Communications Group) Rising Leader of Color.

Penoi is a proud NEFA (New England Foundation for the Arts) National Theater Project advisor, and is on the Working Consortium of First Nations Performing Arts. She is on the board of The Producer Hub, is a core collaborator with Groundwater Arts, and is a co-founding Member of The Industry Standard Group, which looks to expand investment opportunities for BIPOC commercial producers. Previously, Penoi spent three years with the Consensus Building Institute, a non-profit specializing in facilitation and mediation services. Her current anti-racism practice builds upon a decolonization framework and embraces systems change as a key component of that work. She graduated with honors from Princeton University with a degree in music and certificates in vocal performance and theatre & dance.

Annalisa Dias is a Goan-American transdisciplinary artist, community organizer, and award-winning theatre maker working at the intersection of racial justice and care for the earth. She is director of Artistic Partnerships & Innovation at Baltimore Center Stage (BCS), and a co-founder of Groundwater Arts. Prior to joining BCS, Dias was a producing playwright and acting creative producer with The Welders, a DC playwright’s collective; and a co-founder of the DC Coalition for Theatre & Social Justice.

Dias’s work has been supported by the DC Commission on the Arts & Humanities, the Saul Zaentz Fund for Innovation in Film & Media at Johns Hopkins University, the Puffin Foundation, the Keshet Dance and Center for the Arts, the Network of Ensemble Theatres NET/TEN program, TCG’s Global Connections program, and the Mead Theatre Lab.