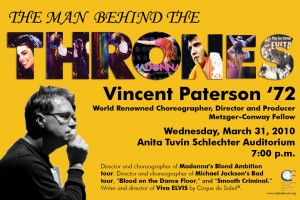 The Man Behind the Thrones

Patterson will talk about his career in the entertainment business and the challenges he confronts as he works intimately with famous performers, making them look their best, while attempting to remain fairly anonymous himself.

About the Speaker
Vincent Paterson is a world-renowned director and choreographer whose career spans just about every genre of the entertainment industry including film, theatre, Broadway, concert tours, opera, music videos, television and commercials.

“What I try to do with my work is to fill the audience with an energy that alters their being in a positive way. The work is the stone thrown into the pond. The ripples emanate from the audience. If the audience is affected even infinitesimally in a positive way, they might make something positive happen in the next five minutes, or tomorrow, or next week. That action will vibrate into the ether and the better the world will be.”

Vincent directed the critically acclaimed opera Manon with soprano Anna Netrebko and conducted by Placido Domingo. His direction of Anna Netrebko: The Woman, The Voice received a nomination for “Best Television Arts Program” at the Montreaux Film Festival. The DVD is the top selling classical DVD in European history. Vincent directed and choreographed Berlin’s first original production of the musical Cabaret at Bar Jeder-Vernunft, a mirror-tent from 1914. Vincent’s direction of the play Gangsta Love, set in a boxing club, earned him a Los Angeles Drama-Logue award for Outstanding Director. He directed Prague’s National BlackLight Theater in Gulliver’s Travels.
Vincent created many projects for Madonna and Michael Jackson, including directing and choreographing Madonna’s Blond Ambition Tour and her legendary “Marie Antoinette”/Vogue performance for MTV. For Michael Jackson, he directed & choreographed the Bad Tour and Blood on the Dance Floor, choreographed Smooth Criminal and many other Jackson music videos and live performances.

“My first step with Viva ELVIS was to understand Elvis the man and his music. Michael Jackson once told me, “Listen to the music. It will speak to you.” It did. The power of Elvis was in his voice. With his originality and complexity of influences, he created a revolution. When Elvis was in Las Vegas, his shows weren’t as big as Viva ELVIS because no shows were this big at that time. What I’m trying to paint, with all humility, is the show he might do today. I would be ecstatic if a new generation became Elvis fans.”