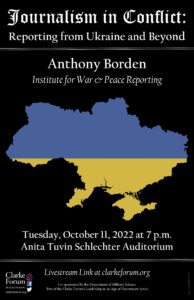 Journalism in Conflict: Reporting from Ukraine and Beyond

Borden will discuss the work of the Institute for War & Peace Reporting (IWPR), whose mission is to “empower local voices to drive change in countries in conflict, crisis, and transition.” He will discuss the role of IWPR and local journalists in the fight against hate speech and propaganda, and consider the importance of reliable information and public debate in global conflict zones, like Ukraine. 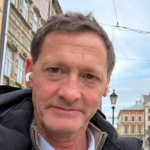 Anthony Borden is the founder of the Institute for War & Peace Reporting (IWPR). He was editor of the highly regarded IWPR magazine War Report from 1991-98 and was commended for the “Best Online Journalism Service” in the 1999 NetMedia journalism awards, for IWPR’s reporting on the Kosovo crisis. He has worked with the UK’s Department for International Development assessing media programs in post-communist countries. He has received a MacArthur Foundation NGO research fellowship to study media and conflict at King’s College, London. He has worked as an editor and writer for Harper’s, The Nation, The American Lawyer and HarperCollins, and contributed to The New York Times, The International Herald Tribune, The Washington Post, The Guardian, Newsweek and numerous other publications. He comments regularly on conflict and media issues for the BBC, CNN and other media. Borden is a member of the Council on Foreign Relations.

“Justice is Costly but Also Priceless”

Heading Off to War:  https://iwpr.net/global-voices/tuesday-1-mar-22-lviv-ukraine