Warming in the Arctic: Why Do We Need to Care?

The Arctic is a critical area to understand as a first glimpse of changes that will be coming as global warming starts having a larger impact on driving climate change. If melting of the Greenland ice sheet causes too much freshening of North Atlantic waters, many bad things could follow ecologically and climatologically. The geopolitical realm of the Arctic is also moving to the global stage, in part as a result of Russia’s international ambitions and their impacts on current and future (Sweden and Finland) NATO members. We will pick out a few critical natural components of the Arctic in this session (sea ice, permafrost, glaciers), and discuss how they will have increasingly direct impacts on geopolitics in the near future.

This event is sponsored by the Clarke Forum for Contemporary Issues and the Center for Sustainability Education.  It is also part of the Clarke Forum’s semester theme, The Arctic.

Visit Let’s Talk Climate for a full list of events in this series. 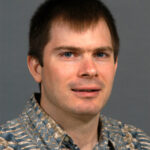 Ben Edwards is professor of earth sciences and the Moraine Chair in Arctic Studies . His research foci are interactions between volcanoes and glaciers (glaciovolcanism), Arctic and Alpine climate change (including directing the Dickinson College Arctic and Alpine Climate Change Research Experience AACCRE), UAV (a.k.a. drones) science, and the impacts of volcanic ash on plants. Volcano studies include the formation of pillow lava and cooling joints, large-scale lava-ice experiments at the Syracuse Lava Lab (http://lavaproject.syr.edu), petrological imaging of lithospheric stratigraphy (using xenoliths from Neogene to Recent volcanoes in the North American Cordillera), applications of theoretical models for understanding the formation of cooling fractures in lavas, and the formation of deposits during volcano-ice interactions. His other interests include soil-forming processes, mineralogy, environmental hazards, the history of science, the history of Arctic exploration, and the influence of plate tectonics on almost everything. His current research involves taking students to places like Alaska (Gates of the Arctic), Iceland (2010 Eyjafjallajokull eruption), Greenland, the Canadian Arctic (Nunavut), British Columbia, Chile (2015 Villarrica eruption) and Peru to study volcanic stratigraphy, glaciers and climate change.