The James Webb Space Telescope, launched in 2021, is NASA’s largest and most powerful space science telescope. Peering back in time, it probes the cosmos to uncover the history of the universe from the Big Bang to alien planet formation and beyond. 100 times more powerful than the celebrated Hubble Space Telescope, Webb can detect the heat signature of a bumblebee at the Earth-Moon distance.

The Joseph Priestley Award recipient is chosen by a different science department each year. The Department of Physics & Astronomy selected this year’s recipient. The event is supported by the Priestley Fund and is sponsored by the Clarke Forum for Contemporary Issues and co-sponsored by the departments of biology, chemistry, earth sciences, environmental studies, mathematics & computer science, psychology, and physics & astronomy and the Churchill Fund.  It is part of the Clarke Forum’s Leadership in an Age of Uncertainty Series. 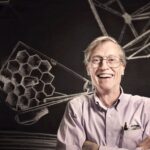 Dr. John C. Mather is a senior astrophysicist and is the senior project scientist for the James Webb Space Telescope (JWST) at NASA’s Goddard Space Flight Center (GSFC). Since the project started in 1995, he has led the JWST science teams. As a postdoctoral fellow at NASA’s Goddard Institute for Space Studies, he led the proposal efforts for the Cosmic Background Explorer (COBE) (’74-’76), and went to GSFC to serve as the study scientist (’76-’88), project scientist (’88-’98), and the principal investigator for the Far IR Absolute Spectrophotometer (FIRAS) on COBE.  With the COBE team, he showed that the cosmic microwave background radiation has a blackbody spectrum within 50 parts per million, confirming the expanding universe model to extraordinary accuracy. The COBE team also made the first map of the hot and cold spots in the background radiation (anisotropy). Mather received the Nobel Prize in Physics (2006) with George Smoot, for the COBE work.