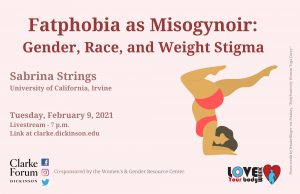 Program is Part of Love Your Body Week

Strings will explore the rise and spread of fatphobia in the Western world and its relationship to race science. She will also consider how this dubious legacy has impacted the science behind the “obesity epidemic.”

The program is sponsored by the Clarke Forum for Contemporary Issues and co-sponsored by the Women’s & Gender Resource Center. It is also part of Dickinson’s Love Your Body Week. 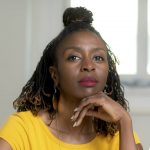 Biography
Sabrina Strings, Ph.D. is an associate professor of sociology at the University of California, Irvine. She has been featured in dozens of venues, including BBC News, NPR, Huffington Post, Medium, Mashable, Los Angeles Times, Bitch Media, and goop. Her writing has appeared in diverse venues including, The New York Times, Scientific American, Ethnic and Racial Studies, and Signs: Journal of Women in Culture and Society. Her book, Fearing the Black Body: The Racial Origins of Fat Phobia (2019), has been named an NYU Press Bestseller. It was awarded the 2020 Best Publication Prize by the Body & Embodiment Section of the American Sociological Association.