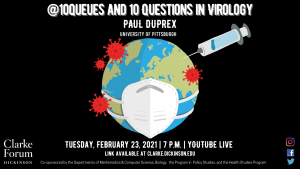 @10queues and 10 Questions in Virology

In early January 2020, a group of people in Wuhan, China who were suffering from pneumonia, were found to be infected with a novel coronavirus – what soon after would be termed SARS-CoV-2, the virus that causes the disease COVID-19. By the end of 2020, the United States had approved two novel vaccines for use against this virus. Additional vaccines likely will be approved soon. The astonishing speed in developing effective vaccines was noted as the 2020 Breakthrough of the Year by Science magazine. During this conversation-led presentation with David Kushner, associate professor of biology, information about the vaccines, how they work, why it is important to be vaccinated, and whether or not we need to be concerned about new viral variants are among the topics that will be discussed. 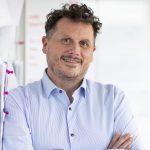 Paul Duprex is the director of the Center for Vaccine Research (CVR), professor of microbiology and molecular genetics and Jonas Salk Endowed Chair for Vaccine Research at the University of Pittsburgh. He is a molecular virologist with nearly twenty five years’ experience. His postgraduate training at the Pirbright Institute, Woking, England, UK focused on foot and mouth disease and he was awarded his Ph.D. in 1994 from The Queen’s University of Belfast, Northern Ireland, UK where he was a lecturer/senior lecturer in molecular virology from 1999 until 2010.

During this time he worked for Johnson and Johnson (J&J) as head of the Department of Emerging Sciences and Technologies at TransForm Pharmaceuticals, Lexington, MA. In 2010 he became an associate, and then full professor of microbiology at Boston University (BU). As director of bioimaging at the BU NEIDL Institute he expanded his work on emerging infectious diseases. These interests continue at the BSL3+ Regional Biocontainment Laboratory in Pittsburgh, where he is the director.

He works on human and animal respiratory viruses such as measles, mumps and SARS-CoV-2. His research focuses on understanding the molecular basis of viral pathogenesis and vaccine attenuation, with a view to developing rationally attenuated vaccines. Developing novel strategies to increase the thermostability and deliver vaccines optimally are key elements in his research program. He is interested in barriers that restrict cross species transmission events, with the aim of developing tools to predict pathogen evolution.

Duprex  has received funding from CEPI, DARPA, DHS, BBSRC, MRC, NIH, The Wellcome Trust, Zoetis LLC, Merck Sharpe Dohme (MSD) and the Bill and Melinda Gates Foundation Grand Challenges in Global Health Program. He serves as reviewer for numerous scientific journals, international institutions and for funding bodies which have supported his program of research. Duprex co-organizes the triennial Negative Strand Virology (NSV) conference and has chaired the Virus Division of the Microbiology Society.

Duprex is an advocate for communicating science and often speaks and writes about vaccine hesitancy. He chaired the American Society of Virology Communications Committee. He is regularly interviewed for television (ABC, Al Jazeera, BBC, CBC, CBS, CNN and RTE), radio (BBC Northern Ireland, NPR, The London Times Radio and RTE) and print (Washington Post, The Boston Globe, Boston Herald, The Financial Times, The New York Times, The Guardian, The New Yorker, Time, National Geographic and Esquire). Duprex appeared on the Trevor Noah podcast in 2020. He was a panelist at the Wilson Center discussing Rolling out a Vaccine for COVID-19: Present Prospects and Lessons from the Past.

David Kushner has been a member of the biology department at Dickinson College since 2003, where he teaches courses in microbiology, virology, immunology, RNA biology, and bioethics.  Kushner has been studying viruses since 1992.  His Ph.D. work at the University of Pennsylvania focused on understanding how cells transformed by certain Adenoviruses escape immune detection, and therefore become cancerous.  His postdoctoral work at University of Wisconsin-Madison featured the first use of a genome-wide screen to identify host factors with roles in virus replication.  At Dickinson, Kushner and his students use an in vivo evolution-based approach to elucidate sequence and structure requirements in a small RNA that enhance pathogenesis caused by a plant virus. Kushner’s research has been published in Journal of Virology, Virology, Proceedings of the National Academy of Sciences, Current Topics in Microbiology and Immunology, Molecular and Cellular Biology, PLoS ONE, Oncogene, Vaccine, and the Journal of Microbiology & Biology Education.

The Center for Vaccine Research

The Fight Against Poliovirus