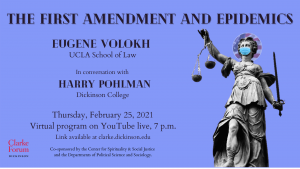 The First Amendment and Epidemics

Under what circumstances can an epidemic justify the government restricting religious worship services?  What about restrictions on other First-Amendment-protected activities, such as protests or political party gatherings?  Volokh will discuss how the Free Exercise Clause, the Free Speech Clause, and the Assembly Clause bear on these questions. This discussion-led presentation will be moderated by Harry Pohlman, professor of political science.

This program is sponsored by the Clarke Forum for Contemporary Issues and co-sponsored by the Center for Spirituality & Social Justice and the departments of political science and sociology. 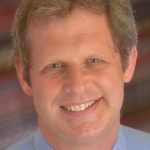 Eugene Volokh has taught First Amendment law for 25 years at UCLA School of Law; he is the author of the textbooks The First Amendment and Related Statutes (7th ed. 2020) and Academic Legal Writing (5th ed. 2016), as well as over 80 legal journal articles. He is also the founder and coauthor of The Volokh Conspiracy, a Weblog (independent 2002-2014, hosted at the Washington Post 2014-2017, hosted at Reason from 2017). 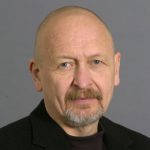 H. L. Pohlman is the A. Lee Fritschler Professor of Public Policy and professor of political science at Dickinson College. He received his Ph.D. from Columbia University in 1982.  Pohlman’s teaching inter­ests include American constitutional law, other law-related courses, and political and legal philosophy. His published works include Terrorism and the Constitution: The Post-9/11 Cases (2008), U.S. National Security Law: An International Perspective (2018), Free Speech and Censorship: Examining the Facts (2019), Voting in America: Examining the Facts (2020), and titles on such subjects as civil rights and liberties, the justice system, and governmental authority and accountability.

Liberty of Movement and Assembly (The Volokh Conspiracy)