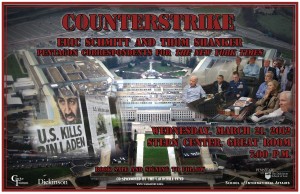 Pentagon Correspondents, The New York Times and Co-authors of Counterstrike

Schmitt and Shanker explore the Pentagon’s secretive and revolutionary new strategy to fight the war on terrorism. This new strategy will have game-changing effects in the Middle East and in the United States.

This event is jointly sponsored by The Clarke Forum for Contemporary Issues, Penn State Dickinson School of Law, the School of International Affairs and Betty R. ’58 and Dan Churchill.

Eric Schmitt is a senior writer for The New York Times who covers domestic and internationalism terrorism issues. For nearly 20 years, he has covered military and national security affairs for the newspaper. Since the Sept. 11 attacks, he has made ten reporting trips to Iraq and five trips to Afghanistan to cover American military operations there. In the past year, he has also reported on counter-terrorism operations in Pakistan, Mali and Southeast Asia.

Previously, Mr. Schmitt reported on demographic and national immigration issues for The Times and covered Congress for five years. During that time, he one of newspaper’s main reporters assigned to the 2000 congressional elections as well as the House and Senate impeachment proceedings against President Bill Clinton in 1999.

Mr. Schmitt joined the Washington bureau of The Times in May 1990 as one of the paper’s two Pentagon correspondents. He covered military operations Somalia, Haiti and the Middle East in the 1991 Persian Gulf war.

Mr. Schmitt has been a reporter with The Times since 1983, with assignments including business news and Long Island regional correspondent. Mr. Schmitt was the assistant to New York Times senior columnist James Reston in 1983-84. Before joining The Times, Mr. Schmitt covered education issues for The Tri-City Herald in Kennewick, Wash.

He earned a bachelor’s degree in International Relations at Williams College, and during that time studied at El Instituto Internacional in Madrid for a year. He received a Knight Journalism Fellowship at Stanford University for the 2006-07 academic year.

Thom Shanker is a correspondent covering the Pentagon, the military and national security for The New York Times. He is co-author, with Eric Schmitt, of “Counterstrike: The Untold Story of America’s Secret Campaign Against Al Qaeda,” published in August of 2011 by Times Books and Henry Holt and Co. For the war in Afghanistan, Mr. Shanker embedded with Army Special Forces at Kandahar. He has conducted numerous reporting trips to Afghanistan and Iraq, and has embedded in the field with units from the squad and company level through battalion, brigade, division and corps. Prior to joining The Times, he was foreign editor of The Chicago Tribune. Mr. Shanker was The Tribune’s senior European correspondent, based in Berlin, from 1992-1995. Most of that time was spent covering the wars in former Yugoslavia, where Mr. Shanker was the first reporter to uncover and write about the Serb campaign of systematic mass rape of Muslim women. He was The Tribune’s Moscow bureau chief from 1985-1988, covering the first years of the Gorbachev era as well as issues of superpower arms control. From 1988-1990, he was The Tribune’s Pentagon correspondent. Mr. Shanker returned to Moscow from 1990-1992 to cover the death of the USSR and the collapse of the communist empire in Eastern Europe. He attended the Fletcher School of Law and Diplomacy and Colorado College.