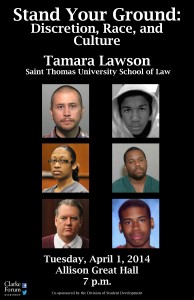 An engaging conversation about how discretion, which is exercised at all levels of the criminal justice system, can affect the outcomes of criminal cases, including claims of self-defense and the right to stand-your-ground.  The dynamics of the discretionary decisions made by legislatures, prosecutors, judges, and juries, in controversial homicide cases like the Trayvon Martin / George Zimmerman case, the Marissa Alexander case, and the Michael Dunn case, as well as other high profile criminal cases, will be discussed.

Biography (provided by the speaker)
Tamara F. Lawson is a tenured professor of law at Saint Thomas University School of Law. She joined the Saint Thomas Law faculty in 2004 where she teaches criminal law,criminal procedure, evidence, and a seminar on race and the law. Professor Lawson has twice been awarded Professor of the Year at St. Thomas. Prior to joining the law faculty, Professor Lawson served as a deputy district attorney at the Clark County District Attorney’s Office in Las Vegas, Nevada, for six years where she prosecuted a wide variety of criminal cases and argued cases on appeal at the Nevada Supreme Court. Professor Lawson has authored multiple law review articles on criminal law, forensic evidence, police brutality, and prosecutorial discretion.  One of her most recent articles is entitled A Fresh Cut in an Old Wound – A Critical Analysis of the Trayvon Martin Killing:  The Public Outcry, the Prosecutors’ Discretion, and The Stand Your Ground Law, published at the University of Florida Journal of Law and Public Policy in the December 2012 issue. In connection with her research on the Trayvon Martin case Professor Lawson has made local media appearances and selected as the Reporter for the American Bar Association’s National Task Force on Stand Your Ground Laws.