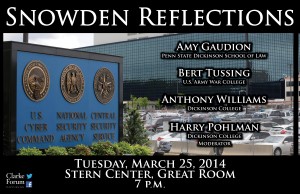 The Snowden leaks of classified information over the last several months have highlighted a number of important issues, including the lawfulness of certain surveillance programs of the National Security Agency, the proper balance between national security and privacy/civil liberties, and the impact the leaks have had on U.S. foreign relations and the intelligence community.  This panel discussion will address these issues with a general focus on the impact that the Snowden disclosures have had on the United States and its constitutional framework.

Amy C. Gaudion is the assistant dean for Academic Affairs, Penn State Dickinson School of Law.  Professor Gaudion’s scholarly and teaching interests focus on national security and constitutional law. She holds appointments in the law school and Penn State’s School of International Affairs, serves as the executive editor of the Penn State Journal of Law & International Affairs, and a legal advisor to the World on Trial public television/multimedia.  Prior to joining Penn State she was an associate with Hangley Aronchick Segal & Pudlin, and a clerk for The Hon. William H. Yohn of the U.S. District Court for the Eastern District of Pennsylvania.

Anthony Williams is a retired CIA senior intelligence officer with a wide range of experience performing an array of domestic and foreign assignments in analysis, operations and management for nearly 32 years.  Experience includes deputy chief of the Arms Control Intelligence Staff,  deputy national intelligence officer for Theater Forces,  chief of strategic planning for Overhead Imagery,  chief of the Russian Affairs Division, chief of the Counterproliferation Interdiction Group, deputy assistant director of Central Intelligence for Collection and executive assistant to the director of Central Intelligence (DCI). Williams held several senior policy-making positions in the national security arena including deputy assistant secretary of defense for Eurasian Policy and congressional fellow in the offices of Senator Sam Nunn and Congressman Edward Markey.  Williams is currently a visiting professor of security studies at Dickinson College and a distinguished fellow of the U.S. Army War College.

Harry Pohlman holds the A. Lee Fritschler Chair in Public Policy and is currently the executive director of The Clarke Forum for Contemporary Issues at Dickinson College. His areas of research specialization include American constitutional law and political and legal thought. His recent publications include an undergraduate constitutional law textbook, Terrorism and the Constitution: The Post-9/11 Cases (2008). His book May It Amuse the Court: Editorial Cartoons of the Supreme Court and Constitution (with Michael A. Kahn) was published by Hill Street Press in 2005. He has also published three recent volumes in the second revised edition of Rowman and Littlefield’s Constitutional Debate in Action series: Civil Rights and Liberties (2005), Criminal Justice (2005), and Governmental Powers (2004).