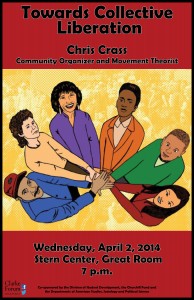 Crass will draw lessons from American social movements and his own experiences working within them over the past 25 years to help us see how divisions of race, class and gender can become bridges to help expand democracy and create healthier communities for all.

This event is sponsored by the Division of Student Development, the Churchill Fund and the Departments of American Studies, Sociology and Political Science.  It is also part of the Clarke Forum’s Leadership in an Age of Uncertainty Series. 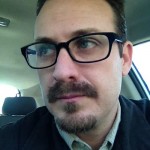 Chris Crass is a longtime organizer working to build powerful working class-based, feminist, multiracial movements for collective liberation.  Throughout the 1990s he was an organizer with Food Not Bombs, an economic justice anti-poverty group, strengthening the direct action-based anti-capitalist Left.  In the 2000s, he was an organizer with the Catalyst Project, which combines political education and organizing to develop and support anti-racist politics, leadership, and organization in white communities and builds dynamic multiracial alliances locally and nationally.

He has written and spoken widely about anti-racist organizing, lessons from women of color feminism, strategies to build visionary movements, and leadership for liberation. His essays have been translated into half a dozen languages, taught in hundreds of classrooms, and included in over a dozen anthologies including Globalize Liberation: How to Uproot the System and Build a Better World, On the Road to Healing: An Anthology for Men Ending Sexism, and We Have Not Been Moved: Resisting Racism and Militarism in 21st Century America.  His book Towards Collective Liberation: anti-racist organizing, feminist praxis, and movement building strategy draws lessons from his organizing over the past 25 years, as well as lessons from case studies of historic and contemporary anti-racist organizing.