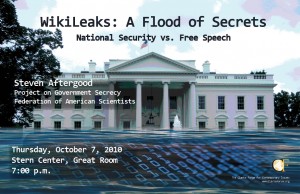 The recent disclosure of up to 90,000 classified documents relating to the Afghanistan War has underscored the difficult balance between preserving open government and preserving national security. Underlying issues that will be addressed include the problem of over classification, the scope of the Espionage Act, and the challenges of protecting sources and methods in the age of the internet.

Steven Aftergood is a senior research analyst at the Federation of American Scientists. He directs the FAS Project on Government Secrecy, which works to reduce the scope of government secrecy and to promote reform of official secrecy practices.
He writes Secrecy News, an email newsletter (and blog) which reports on new developments in secrecy policy for more than 10,000 subscribers in media, government and among the general public.

In 1997, Mr. Aftergood was the plaintiff in a Freedom of Information Act lawsuit against the Central Intelligence Agency which led to the declassification and publication of the total intelligence budget ($26.6 billion in 1997) for the first time in fifty years. In 2006, he won a FOIA lawsuit against the National Reconnaissance Office for release of unclassified budget records.

Mr. Aftergood is an electrical engineer by training (B.Sc., UCLA, 1977) and has published research in solid state physics. He joined the FAS staff in 1989.

He has authored or co-authored papers and essays in Scientific American, Science, New Scientist, Journal of Geophysical Research, Journal of the Electrochemical Society, and Issues in Science and Technology, on topics including space nuclear power, atmospheric effects of launch vehicles, and government information policy.

The Federation of American Scientists, founded in 1945 by Manhattan Project scientists, is a non-profit national organization of scientists and engineers concerned with issues of science and national security policy.