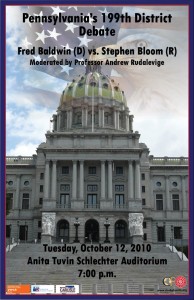 Tuesday, October 12, 2010
Anita Tuvin Schlechter Auditorium – 7:00 p.m.
The Republican and Democratic candidates running in the general November election for the 199th seat in the Pennsylvania state legislature will discuss the central issues confronting local voters and answer questions from the audience. The debate will be moderated by Prof. Andrew Rudalevige, political science department

Co-sponsored by the Greater Carlisle Area Chamber of Commerce, the League of Women Voters and the YWCA Carlisle.

Biographies
Stephen Bloom (Republican)
Bloom has served as a business lawyer and community leader for 25 years. He is a 1983 graduate of Penn State University, with a B.S. in agricultural economics and rural sociology, and a 1987 graduate of the Penn State Dickinson School of Law. His first book, The Believer’s Guide to Legal Issues, was published in 2008. He has also served terms as president of the Downtown Carlisle Association and treasurer of the Greater Carlisle Area Chamber of Commerce. In addition to his Carlisle law practice at the firm of Irwin & McKnight, P.C., he teaches economics and business law as an adjunct instructor of management & business at Messiah College. Visit www.stephenlbloom.com for more information.

Fred Baldwin (Democrat)
Baldwin has served 16 years on the Carlisle Area School Board, 12 as president. During that time the district took initiatives in educational technology, healthcare cost management and, most recently, launching a major solar energy project. He holds undergraduate degrees in history and government and a Ph.D. in American history. Baldwin is the author of three books and more than 400 articles, many of them on local and regional economic development. Visit www.votefredbaldwin.com for more information.