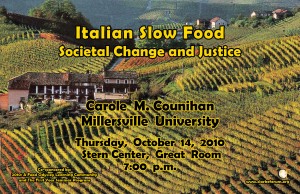 This talk uses ethnographic interviews with members of the Italian Slow Food Movement – a coalition of 100,000 members around the world devoted to promoting “good, clean, and fair food” – to explore whether food practices can be the basis for advancing personal growth as well as social and economic justice.

This event is co-sponsored by the 2010: A Food Odyssey Learning Community and the First Year Seminar Program.

Biography (provided by speaker)
Carole M. Counihan is professor of anthropology at Millersville University in Pennsylvania. She has a BA in history cum laude from Stanford University and a Ph.D. in anthropology from the University of Massachusetts. Dr. Counihan’s research centers on food, culture, gender, and identity in the United States and Italy. Supported by a 2005-2006 National Endowment for the Humanities Fellowship, she authored A Tortilla Is Like Life: Food and Culture in the San Luis Valley of Colorado (University of Texas Press, 2009), which is based on food-centered life histories collected from Hispanic women in the town of Antonito, Colorado. Counihan is also author of Around the Tuscan Table: Food, Family and Gender in Twentieth Century Florence (Routledge, 2004) and The Anthropology of Food and Body: Gender, Meaning, and Power (Routledge, 1999). She is editor of Food in the USA: A Reader (Routledge 2002) and, with Penny Van Esterik, of the first and second editions of Food and Culture: A Reader (Routledge 1997, 2008). She is editor-in-chief of the scholarly journal Food and Foodways. Counihan has been a visiting professor at the University of Gastronomic Sciences in Italy since 2005, and during Spring 2009 she began a new ethnographic research project on food activism in Italian chapters of the Slow Food movement.

Description of Lecture (provided by speaker)
This presentation describes ethnographic research on the Italian Slow Food Movement. Centered in Bra, Italy, and led by Carlo Petrini, Slow Food is a growing, loosely structured socio-political coalition of 100,000 members across the globe who are devoted to promoting “good, clean and fair food.” All members belong to local chapters called condotte, which are the grassroots vehicles of Slow Food’s mission and are run totally by volunteers who arrange local events and participate in the national organization. During spring semester 2009 I conducted ethnographic interviews with thirty-eight leaders and members of several condotte in diverse regions of Italy. My presentation uses these interviews to explore participation in the chapters as an example of food activism, defined as the process of advancing social and economic justice through food practices. It focuses on the roles of education and gastronomic pleasure in Slow Food chapter activities to determine if these work to bring about personal and societal change.