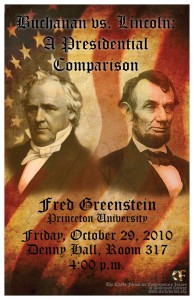 Buchanan vs. Lincoln: A Presidential Comparison

James Buchanan is an 1809 graduate of Dickinson College.

Biography (provided by the speaker)
Fred I. Greenstein is Professor of Politics Emeritus at Princeton University. His books include Children and Politics (1965), Personality and Politics (1969), The Hidden-Hand Presidency: Eisenhower as Leader (1982), How Presidents Test Reality (1989, with John P. Burke), The Presidential Difference: Leadership Style from FDR to Barack Obama (2009), and Inventing the Job of President: Leadership Style from George Washington to Andrew Jackson (2009). He is a fellow of the American Academy of Arts and Sciences and past president of the International Society for Political Psychology. He received a BA from Antioch College in 1953 and a Ph.D. from Yale University in 1960.