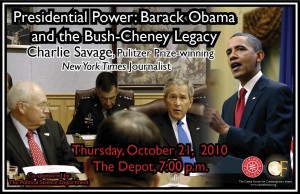 How President Obama’s team has grappled with the executive powers they inherited from the Bush-Cheney administration presents a case study in the multi-generational, bipartisan trend toward escalating White House authority – and a warning sign for the future of American-style checks and balances.

Savage’s work on the Bush-Cheney administration’s efforts to expand presidential power has been widely recognized. His articles in the Boston Globe received the Pulitzer Prize for National Reporting, the American Bar Association’s Silver Gavel Award, and the Gerald R. Ford Prize for Distinguished Reporting on the Presidency. Savage’s book about the growth of executive power, Takeover, was named one of the best books of 2007 by both Slate and Esquire. The book also received the Award for Constitutional Commentary by the bipartisan Constitution Project and the New York Public Library’s Helen Bernstein Book Award for Excellence in Journalism.

Information about the Lecture (provided by speaker)
As a presidential candidate, Senator Barack Obama was sharply critical of the Bush-Cheney administration’s efforts to expand executive power, which he portrayed as unwise and in some cases unconstitutional. That effort had traced back to then-Vice President Dick Cheney’s experiences in the Ford administration, when the so-called “imperial presidency” that developed the first decades of the Cold War seemed to come crashing down amid the disasters of Watergate and Vietnam. A quarter-century later, the Bush-Cheney administration had taken office determined to leave the presidency stronger than they had found it, and that effort would become one of its most successfully implemented policy goals.

Shortly after President Obama’s inauguration, he signed executive orders that seemed to signal a wide-ranging intent to roll back those changes. Yet in the months and years that followed, a far more complex record emerged: once in power, the Obama administration proved reluctant to relinquish many of the authorities that its predecessor had developed — and in some ways it has pushed the envelope still further. Civil libertarian groups and other critics have expressed disillusionment, accusing Obama of entrenching governing practices that his campaign rhetoric had suggested he would instead dismantle. But the administration insists that it has made a significant break with its predecessor by relying on Congressional authorization rather than defying it in pursuit of its policies.

A look at how President Obama’s team has grappled with the executive powers they inherited from the Bush-Cheney administration presents a case study in the multi-generational, bipartisan trend toward escalating White House authority – and a signpost for the future of American-style checks and balances.

Suggested Readings
Book:
Savage, Charlie. “Takeover: The Return of the Imperial Presidency and the Subversion of American Democracy.” http://www.amazon.com/Takeover-Imperial-Presidency-Subversion-Democracy/dp/0316118044