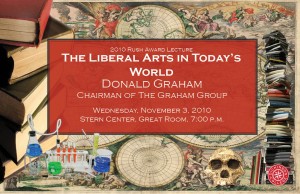 Chairman of The Graham Group

The Liberal Arts in Today’s World

Mr. Graham will speak about the vital importance of a liberal arts education and the need for broad-based thinking in today’s business and political climate.

Biography (provided by the speaker)
Donald C. Graham founded Graham Engineering in 1960 with no capital in the basement of his rented farmhouse in rural Pennsylvania. Today, the Graham Group manages approximately $2.5 billion of internal and third party capital and is the anchor sponsor of four investment management businesses including the family investment office, Graham Capital Company located in York, PA and three private equity firms based in the Philadelphia area, Graham Partners, Inverness Graham and Striker Partners. The Graham Group manages a significant pool of marketable securities along with investments in over 100 private equity, real estate and hedge funds. The Graham Group also maintains a direct co-investment operation in businesses where it believes we have something to offer, other than just capital. The co-investments are in diverse industries and include packaging, building products, aerospace components, electronics and drainage and irrigation products.

In addition to his business activities, Mr. Graham has been an active benefactor in community, cultural and environmental projects. He has served on boards and committees of numerous academic institutions including the University of Michigan, Babson College, Burke Mountain Academy, York College and Dartmouth College. He has funded several faculty chairs and scholarship programs at these institutions and has funded the Graham Certificate Program in Entrepreneurial Studies at Penn State York. He has also received the Benjamin Rush Award from Dickinson College. His community support includes projects such as the Graham Aquatic Center in York, PA.

From the University of Michigan he has received the Alumni Society Medal for extraordinary achievement, has been involved in and supported the Tauber Institute, the Graham Environmental Sustainability Institute, the Sam Graham Trees and Trails, the Graham Nanotech Labs, the Technical Entrepreneurial Studies Program and has supported scholarships and several projects at the Athletic Department. He has served in various capacities at the University including the President’s Advisory Group, College of Engineering National Advisory Committee and Honorary Co-Chair for the Michigan Difference Campaign.

Mr. Graham has been active in many professional organizations, including Young Presidents’ Organization, Chief Executive Officers, World Business Council, American Business Council, Recycling Advisory Council and the local Pennsylvania Manufacturer’s Association where he was Chairman. He currently serves on over ten Corporate Boards.

The Benjamin Rush Award
The Benjamin Rush Award for Humanistic Values in Corporate and Government Life, established in 1985, is one of the most prestigious annual awards presented at Dickinson College. The Award celebrates the achievements of officials and executives who have reached the highest levels in government service or the corporate world. It is named in honor of Benjamin Rush, the prominent colonial Philadelphia physician who was a signer of the Declaration of Independence and founder of Dickinson.

The Award is conferred at a public ceremony on the Dickinson campus, during which the recipient presents the annual Rush Award Lecture. The lectureship guidelines stipulate that the recipient should comment on issues of significance to government or the corporate world, with some attention to the value of the liberal arts in preparing individuals for responsible citizenship. The recipient of the Award is presented with an honorarium and a bronze medal bearing Rush’s likeness. Prior to the Rush Lecture the college hosts a reception and dinner in honor of the recipient.