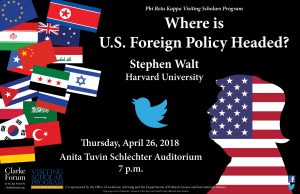 This lecture explores the future of U.S. foreign policy under President Trump. Walt argues that Trump, his bellicose tweets notwithstanding,  is gradually being captured, coopted, and constrained by the foreign policy establishment. Under Trump, therefore, U.S. foreign policy is likely to be an even more inept version of our recent follies.

The event is sponsored by the Clarke Forum for Contemporary Issues and Phi Beta Kappa and co-sponsored by the Office of Academic Advising, Political Science and International Studies. 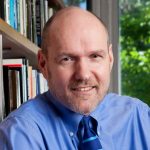 Stephen Walt is Belfer Professor of International Affairs at Harvard’s Kennedy School of Government and a former academic dean. He also taught at Princeton and the University of Chicago and has been a resident associate of the Carnegie Endowment for Peace and a guest scholar at the Brookings Institution. He is a contributing editor at Foreign Policy, co-chair of the editorial board of International Security, and co-editor of the Cornell Studies in Security Affairs book series. A fellow of the American Academy of Arts and Sciences, he received the International Studies Association’s Distinguished Senior Scholar award in 2014. His books include The Origins of Alliances; Taming American Power: The Global Response to U.S. Primacy; and The Israel Lobby and U.S. Foreign Policy. He is currently writing a book about why U.S. foreign policy keeps failing.

Since 1956, the Phi Beta Kappa Society’s Visiting Scholar Program has been offering  undergraduates the opportunity to spend time with some of America’s most distinguished scholars. The purpose of the program is to contribute to the intellectual life of the institution by making possible an exchange of ideas between the Visiting Scholars and the resident faculty and students.

The Visiting Scholars travel to more than 100 colleges and universities each year, spending two days on each campus and taking full part in the academic life of the institution. They meet informally with students and faculty members, participate in classroom discussions and seminars, and give a public lecture open to the academic community and the general public.

Over the last 60 years, 648 Visiting Scholars have made 5,288 visits to Phi Beta Kappa sheltering institutions.

Founded in 1776, the Phi Beta Kappa Society is the nation’s most prestigious academic honor society. Its mission is to champion education in the liberal arts and sciences, to recognize academic excellence, and to foster freedom of thought and expression.