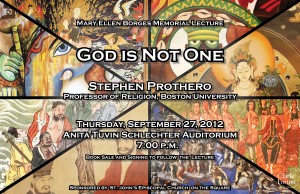 God is Not One

Are the world’s religions different paths up the same mountain? Prothero, author of God is Not One, explains why, especially after 9/11, real and enduring interreligious understanding is achieved, not with a “pretend pluralism,” but with a clear-eyed recognition of religious difference.

This event is sponsored by St. John’s Episcopal Church on the Square and the Clarke Forum for Contemporary Issues.

Biography (provided by the speaker)
Though America is one of the most religious places on Earth, in reality, its citizens know little about religion. In his provocative book Religious Literacy, Stephen Prothero addresses this national crisis, and offers solutions. One of them is mandatory academic study of world religions in public schools. The more that Americans know about religion — whether or not they themselves are religious — the less likely they will be to defer, through sheer ignorance, to politicians who often frame their actions in a religious context. In his latest book, God is Not One, Prothero looks at the differences between religions and how they have shaped the world. Religious plurality, or the idea that each religion is just a “different way up the same mountain”, is a dangerous belief. The sooner we can understand the differences between religions, the more we can figure out how to achieve religious tolerance and co-existence. Prothero’s bestselling books have inspired a Time cover story, and has landed Prothero (“a world-religions scholar with the soul of a late-night television comic” — Newsweek), on Oprah, The Daily Show and as a speaker on religious literacy at the White House. Religious ignorance is not bliss, he shows us. It can be dangerous.

Can citizens understand the War in Iraq without knowledge of Islam? Can they debate gay marriage or stem-cells without knowledge of the Bible? In his talks, Prothero shows us that Americans don’t know much about their own religions — much less those of others. He then makes an elegant, timely argument for why religion must become the “fourth R” of education. Only by teaching students in high school and in colleges about the Bible and the world’s religions (in an academic sense), can we equip them to understand American politics and world affairs. An intelligent, engaging presenter, Prothero presents a balanced understanding of one of the most highly charged issues of our time.

Prothero is a professor of religion at Boston University. He earned his Ph.D. in religion from Harvard, and is a specialist in Asian religious traditions in the United States. He is a regular contributor to CNN.com’s Belief Blog. He is also the author of American Jesus: How the Son of God Became a National Icon, is a frequent guest on NPR, has appeared on The Today Show and The O’Reilly Factor, and has written for Salon.com and The New York Times Magazine.