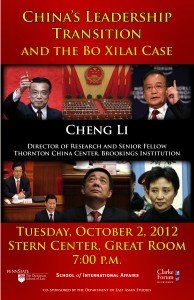 Just as the Chinese Community Party elite is trying to smooth the way for the transfer of power to a new generation of Chinese leaders, one of its rising stars, Bo Xilai, has been ousted as party chief of Chongqing and his wife is charged with the murder of a British businessman. What are the implications of this unfolding crisis for China’s decision-making process, economic policies, social stability, and foreign relations? More information

Cheng LI is the director of research and senior fellow at the Brookings Institution’s John L. Thornton China Center. Dr. Li currently also serves as a director of the National Committee on US-China Relations, a member of the Academic Advisory Team of the Congressional U.S.-China Working Group, and a member of the Council on Foreign Relations.  Dr. Li is the author/editor of numerous books, including China’s Leaders: The New Generation, Bridging Minds Across the Pacific: The Sino-U.S. Educational Exchange 1978-2003, China’s Changing Political Landscape: Prospects for Democracy, China’s Emerging Middle Class: Beyond Economic Transformation.

Dr. Li has frequently been called upon to share his unique perspective and insights as an expert on China. He recently appeared on CNN, C-SPAN, BBC, ABC World News with Diane Sawyer, NPR Diane Rehm Show, NPR News Hour with Jim Lehrer, and the PBS Charlie Rose Show.

He received an M.A. in Asian Studies from the University of California, Berkeley in 1987, and a Ph.D. in Political Science from Princeton University in 1992.