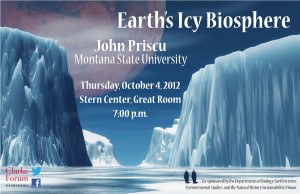 Priscu will demonstrate that the Earth’s icy systems, particularly the Antarctic ice sheet and related subglacial environments, hold a large and potentially active carbon pool, comprised of phylogenetically and metabolically diverse prokaryotic organisms. He will then relate these results to our search for life on other icy bodies in our solar system.

This event is sponsored by the Clarke Forum for Contemporary Issues and co-sponsored by the Departments of Biology, Earth Sciences, Environmental Studies and Science and The Natural History Sustainability Mosaic. 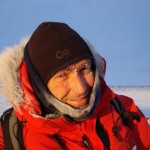 Biography (provided by the speaker)
Professor Priscu received his M.S. degree from the University of Nevada, Las Vegas in 1978 where he studied how the ecosystems on the lower Colorado River were influenced by large dams. He then went on to obtain his Ph.D. from the University of California, Davis in 1982 for his work on high altitude lakes. Following his Ph.D. he joined a government laboratory in New Zealand where he was involved with research on the marine and freshwaters of New Zealand. It was during this period that he became interested in Antarctic ecosystems and spent 4 months during the austral summer of 1984 studying the permanently ice-covered lakes in the Transantarctic Mountains. He joined the faculty at Montana State University, Bozeman in late 1984 where he continues to conduct research on arctic and Antarctic ecosystems. Professor Priscu has spent 28 field seasons on the “ice” and has introduced more than 300 young investigators to this environment as members of his research teams. His work in Antarctica has focused on climate change, life in extreme environments, subglacial life, global ecosystem process, microbial biodiversity and Astrobiology. Professor Priscu, a Fellow of the American Association for the Advancement of Science and a Fellow of the American Geophysical Union, has received numerous awards for his polar research, including a valley and a stream in Antarctica named after him, the Goldwaithe Medal for his work on the geomicrobiology of polar ice sheets, and the international  Medal for Scientific Excellence from the Scientific Committee on Antarctic Research (SCAR). He chaired for 10 years an international group of specialists tasked with designing the science and technology plans to sample the previously untouched aquatic ecosystems that lie more than two miles beneath the Antarctic ice sheet and has led the first expeditions into the Transantarctic Mountains during the winter to examine microbial survival during the polar night. His field teams have spent months sleeping in tents with temperatures hovering near minus 50 under complete darkness during the winter expeditions. Professor Priscu’s work on Earth’s icy biosphere has led to his involvement on our search for life on other icy worlds such as Mars and Europa. He has served on National Academy of Sciences (NAS) Committee on the Prevention of Contamination on Mars (PREVCOM), the NAS Committee on the Origins and Evolution of Life (COEL) and the NAS Polar Research Board (PRB).  Priscu has published more than 200 scholarly articles on his research and edited 4 books. Many of his students hold prestigious positions at institutions throughout the United States and in Europe. His hobbies include playing blues and jazz with his band and flying bush planes into remote airstrips.