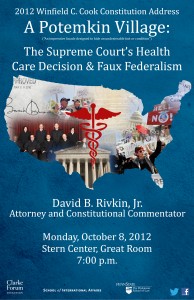 This event is jointly sponsored by The Clarke Forum for Contemporary Issues, Penn State Dickinson School of Law and School of International Affairs.

Biography (provided by the speaker)
David B. Rivkin, Jr., is a partner in the Washington office of Baker Hostetler LLP, and co-chairs the firm’s appellate and major motions practice. He is also a visiting fellow at the Center for the National Interest and a contributing editor of the National Review. He specializes in regulatory and litigation work, with a particular emphasis on constitutional, international law and public policy issues.

Mr. Rivkin has been involved in numerous high-profile cases. He has represented the 26 states that have challenged the constitutionality of the Patient Protection and Affordable Care Act and was the lead outside counsel in the District Court and Court of Appeals. He also represented for a number of years the Republic of Croatia before the International Criminal Tribunal for the former Yugoslavia and the International Court of Justice on a wide range of issues involving international humanitarian law and the laws of war. Mr. Rivkin also has considerable experience with litigation involving national security-related matters, including defending Bivens actions brought against former Secretary of Defense Donald H. Rumsfeld. He is presently representing Texas and Wyoming in their challenge to the key EPA greenhouse gas regulations, issued under the Clean Air Act. From 2004 through 2007, he served as an expert member of the United Nations Subcommission on the Promotion and Protection of Human Rights.

Before returning to the private sector, Mr. Rivkin served in a variety of legal and policy positions in the Reagan and George H. W. Bush Administrations, including stints at the White House Counsel’s office, Office of the Vice President and the Departments of Justice and Energy. Prior to embarking on a legal career, he served as a defense and foreign policy analyst, focusing on Soviet affairs, arms control, naval strategy and NATO-related issues.

Mr. Rivkin holds a J.D. degree from Columbia University Law School, a master’s degree in Soviet affairs from Georgetown University, and a bachelo’s of science degree from the Georgetown University’s School of Foreign Service. He is a recipient of numerous academic and professional awards, including Phi Alpha Theta (1981), U.S. Naval Proceedings annual Alfred Thayer Mahan Award for the best maritime affairs article (1984), and the Burton Award for Legal Achievement (2011).

He has been a frequent commentator and guest on TV and radio shows, including CNN, NBC and MSNBC, CBS, ABC/Nightline, FOX News, NPR, PBS, BBC, Canadian Broadcasting Corporation, and numerous Australian, French, German and Swiss TV stations. He has also been involved in a number of Republican presidential and senatorial campaigns, including Romney for President, Inc. and Wendy Long for New York, Inc., as a surrogate speaker and senior advisor.