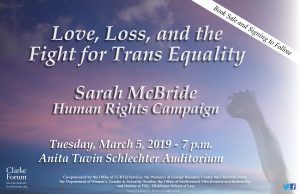 Love, Loss, and the Fight for Trans Equality

Sarah McBride is the national press secretary for the Human Rights Campaign and one of America’s leading public voices in the fight for LGBTQ equality. Her moving memoir, Tomorrow Will Be Different, chronicles her journey as a transgender woman, from coming out to her family and school community, to fighting for equality in her home state and nationally, to her heartbreaking romance with her late husband. A book sale and signing will follow the program.

This event is sponsored by the Clarke Forum for Contemporary Issues and co-sponsored by the Office of LGBTQ Services, the Women’s & Gender Resource Center, the department of women’s, gender & sexuality studies, the Churchill Fund, the Office of Institutional Effectiveness and Inclusivity and Outlaw at PSU -Dickinson School of Law. It is part of the Clarke Forum’s Leadership in an Age of Uncertainty Series. 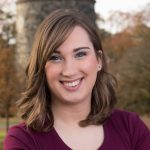 Sarah McBride is a progressive activist and currently the national press secretary at the Human Rights Campaign, the nation’s largest LGBTQ civil rights organization. In 2016, Sarah made history when she became the first openly transgender person to address a major party convention.

A native of Wilmington, Delaware, Sarah has been involved in politics and progressive advocacy for more than a decade. She co-founded a statewide high school young Democrats organization and worked for the campaigns of Governor Jack Markell (D-DE) and Attorney General Beau Biden (D-DE). During her sophomore year of college, Sarah was elected student body president at American University.

Sarah first made national headlines when, at the end of her term as student body president, she came out publicly as transgender in the student newspaper. She went on to intern in the Obama White House, the first openly trans woman to do so, and, after graduating from college, helped lead the successful effort to pass gender identity nondiscrimination protections in Delaware.

It was during her time at the White House that Sarah met Andrew Cray, a transgender man and fellow advocate. The two fell in love and began working together in the fight for LGBTQ equality. Andy was diagnosed with terminal cancer in 2014, and just days after they married, he tragically passed away. Andy’s passing instilled in Sarah a firm belief in the urgency of political and social change.

Now as a spokesperson for the nation’s largest LGBTQ advocacy organization, Sarah has become one of America’s most public voices in the fight for LGBTQ equality, culminating in her address before the nation during the 2016 presidential election. Her moving memoir, Tomorrow Will Be Different chronicles her journey as a transgender woman, from coming out to her family and school community, to fighting for equality in her home state and nationally, to her heartbreaking romance with her late husband.

From Delaware to North Carolina to Texas, Sarah is working to resist the politics of hate and to move equality forward.