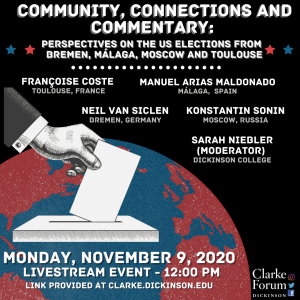 Community, Connections and Commentary:
Perspectives on the US Elections from Bremen, Málaga, Moscow and Toulouse

Given the interdependence of the world today, hearing global voices, views and perspectives is more important than ever. Join us and partners from our communities abroad for a discussion on the 2020 U.S. elections. Dickinson College collaborators representing Bremen, Germany; Toulouse, France;  Málaga, Spain;  and Moscow, Russia will give an in-depth analysis of the election results, bringing their insight and highlighting the impact of the elections both near and far.

This event is sponsored by the Clarke Forum for Contemporary Issues at Dickinson College. 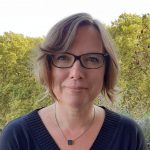 Françoise Coste is a professor of American studies at the University of Toulouse – Jean Jaurès. She devotes her research to contemporary American politics, with a special focus on the history of women’s rights and on the contemporary conservative movement. Her biography of Ronald Reagan (Reagan), published in 2015 by Perrin, won the award for Best Political Biography of the Year in France in 2015. She is currently working on a history of the Republican Party since 1945, to be published by Humensis. This project will try to make sense of the Trump years by analyzing the morphing of American conservatism into right-wing populism. 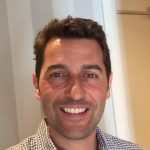 Manuel Arias Maldonado is associate professor in political science at the University of Málaga, Spain. He has been a Fulbright Scholar at the University of Berkeley, California, as well as a visiting fellow at the Rachel Carson Center in Munich and the Department of Animal Studies at NYU. He has also researched in places such as Keele, Oxford, and Siena, and taught at the Centro de Estudios Políticos y Constitucionales in Madrid, as well as, more briefly, in several European universities. He has worked extensively on environmental issues, from a sociopolitical as well as from a philosophical standpoint. Other research topics include political liberalism, deliberative democracy, social movements, new information technologies and political affects. Apart from a couple of books in Spanish, he is the author of Real Green. Sustainability after the End of Nature (Ashgate, London, 2012) and Environment and Society. Socionatural Relations in the Anthropocene (Springer Verlag, Heidelberg, 2015). He has co-edited, together with Zev Trachtenberg, Rethinking the Environment for the Anthropocene (Routledge, 2019). He has also written the article about “Nature” in the Wiley-Blackwell Encyclopedia of Political Thought (2014). In Spain, he has published La democracia sentimental. Política y emociones en el siglo XXI (Página Indómita, 2016), Antropoceno. La política en la era humana (Taurus, 2018), (Fe)Male Gaze. El contrato sexual en el siglo XXI (Anagrama, 2019) and Nostalgia del soberano (La Catarata, 2020). His latest book is Desde las ruinas del futuro: Teoría política de la pandemia (Taurus, 2020). Likewise, his papers have been featured in journals such as Environmental Politics, Environmental Ethics, Environmental Values or The Anthropocene Review. Finally, he publishes regularly in several Spanish newspapers and cultural journals, such as Revista de Libros (where he writes a blog), Revista de Occidente, Letras Libres and Cuadernos Hispanoamericanos. He has a weekly column in the newspaper El Mundo. 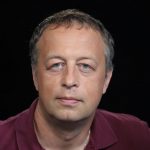 Konstantin Sonin is John Dewey Distinguished Service Professor at the University of Chicago Harris School of Public Policy. His research interests include political economics, development, and economic theory. His papers have been published in leading academic journals in economics and political science.

Sonin earned an MSc and Ph.D. in mathematics from Moscow State University and an M.A. in economics at Moscow’s New Economic School (NES), was a postdoctoral fellow at Harvard University’s Davis Center for Russian and Eurasian Studies, served on the faculty of NES and Higher School of Economics (HSE) in Moscow, and was also a member of the Institute for Advanced Study in Princeton. Now he is affiliated with HSE and Stockholm Institute of Transition Economics as a visiting professor and adviser.

In addition to his academic work, Sonin writes a column for VTimes and a blog on Russian political and economic issues.

Neil van Siclen was born and raised in Boston, Massachusetts. After graduating from high school in his junior year, he spent his senior year at a German grammar school in Zweibrücken, where his host family and friends taught him to fluently speak “Pfälzisch”, the dialect spoken in that corner of Germany.

Upon his return to the U.S. he studied German and economics at the University of Minnesota and in early 1982 at the universities in Trier and Düsseldorf. After his studies he went to Bremen in 1989 and worked several years in the import/distribution sector before he started his translation business. He soon expanded the business by adding a language school and later a travel agency specializing in educational travel packages. In the age of COVID, he has been consulting businesses and organizations on how to enter the US and Canadian markets as well as providing support to German companies that have been acquired by U.S. firms and training staff to adjust to American management styles.

Neil van Siclen had always been an active expat. In 1991 he joined the German-American Club, a non-profit, non-governmental organization, which merged with a similar club to form the Carl Schurz German-American Club in 1998. In 2004 he joined the board of the club and in 2010 was elected president of the organization. As an expert in transatlantic relations and American social, economic and political systems, he is a regular speaker at public lectures, a frequent guest on local and regional television and radio and a regular analyst for the local papers. He also volunteers his time and visits schools to talk to students about the multifaceted aspects of transatlantic relations.